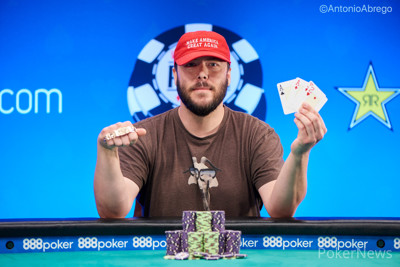 
Event #49: $10,000 Pot-Limit Omaha 8-Handed Championship kicked off 4 days back at the 2018 World Series of Poker and after some intense action, a winner has been crowned. It was the familiar face of Loren Klein who shipped the tournament, winning his third bracelet in three consecutive years at the WSOP.

This turned out to be the biggest win of his live poker career, taking his career winnings past $2.7 million. He beat 3-time bracelet winner Rep Porter in heads-up, and 5 of the 6 that came out to play Day 4 have won gold bracelets in the past. Scott Bohlman, who earned his first bracelet just a few days back, finished 6th in this tournament.

“All the haters really helped me to bring this one home. It felt amazing, and I can’t wait to talk to all of them when I see them in the Rio hallways, I might even wear the bracelet for a bit. People have been talking shit about the MAGA hat for days and wishing me bad things all day today, it is fantastic,” talking about his ‘Make America Great Again’ (MAGA) cap that he wore during the tournament, and critics expressing their views on his Twitter account.

Keep reading GutshotMagazine.com for more updates on poker tournaments at the 2018 WSOP.