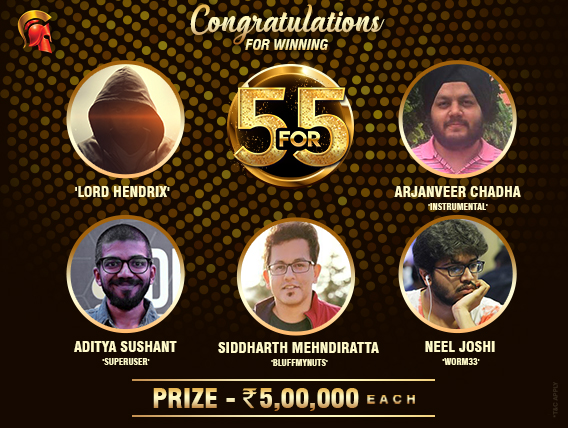 
Just a little over 3 months back, The Spartan Poker launched a new tournament offering called ‘5 For 5’ where literally, the top 5 players from the tournament walk away as winners, with individual prizes of INR 5 lakh to each of these players. The specialty of this tournament is that there are not one, but five winners, as play is stopped when someone busts in 6th place.

Yesterday was the fourth edition of this tournament and once again, some of the best players in the country emerged victorious after a long grind. A strong field of 722 entries each paid the INR 5,500 buy-in to play in yesterday’s 5 For 5 tournament which kicked off at 6pm last evening, and ended at 3:11am this morning.

Eventually, only the top 60 from this field could finish in the money, with a minimum cash prize of INR 9,927 being given away. From the few who won min-cashes were Manoj Pentakota, Pranav Khandalkar and Ashish Ahuja. As the prizes got slightly bigger, some more Spartan regulars cashed out, including Meherzad Munsaf (44th), Anant Purohit (34th), recent Godfather winner Sahil Mahboobani (30th), Mayank Jaggi (28th), Sahil Agarwal (23rd), Siddharth Karia (13th), and recent Summit winner Ankit Wadhawan (12th).

Here’s where the tournament got exciting and the competition got even tougher as ever. On the final table, there’s better chances for the short-stacked players as here, the objective isn’t to finish with all the tournament chips. Instead, surviving until the final five is also a tactic that can be used, as all of the final five get paid equally.

We all know how difficult it can get when India’s best players are in the mix, and the FT was no different. Players would’ve been wary of losing out on the massive pay-jump and the player who busted last and finished in 6th place was ‘pgp282’ who was awarded INR 2.48 lakh before the tournament was suspended and the winners were announced.

Like we mentioned earlier, only the best in the country take part in this Spartan signature tournament, and here, some of the best were declared winners. These were Siddharth Mehndiratta aka ‘bluffMyNuts’, Neel Joshi aka ‘Worm33’, Aditya Sushant aka ‘SuperuSer’, Arjanveer Chadha aka ‘instrumental’ and ‘Lord Hendrix’. Each of them won INR 5,00,000 in prize money.

Gutshot congratulated these winners and they were all very happy with their respective achievements. “Love the format and the structure. Never gets to a point that everyone is just shoving. Lots to play for and a different challenge for the players as the aim is no longer to come first but to remain in top 5. That requires a totally different strategy,” said Arjanveer Chadha, who added to his huge collection of online poker titles.

Another Spartan regular Neel Joshi also commented on this victory, saying, “I’ve come 7th in 5 For 5 once, which was really frustrating. I now came into top 5 (5th) as the shortest stack, so it was pretty satisfying. Had to make some big folds, and really understand how ICM works in a tournament like this.”