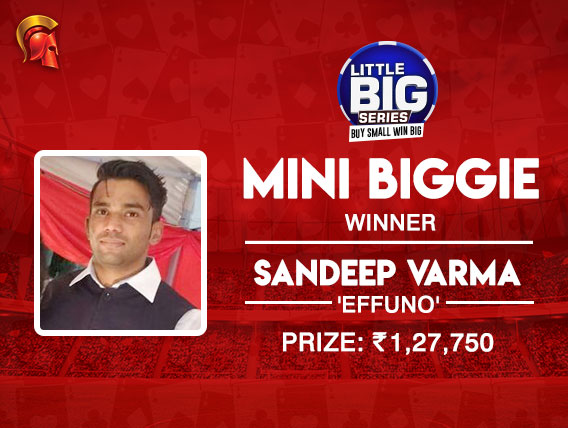 
The recently concluded India Online Poker Championship (IOPC) at The Spartan Poker give away crores in prizes. However the action continues in the following week with the Little Big Series (LBS) promising more than 26 lakhs in cash and prizes at Spartan. The big winner last evening was Sandeep Varma, playing as ‘effuno’ who claimed the Mini Biggie title on Day 2 of the LBS. We will get to an update on that tournament but first let’s do a round of the rest of the events on the second day of action.

The action began in the afternoon at 2:00 pm with a 20,000 guaranteed tournament featuring a buy-in of just Rs.55. This re-entry format tournament was also the only Pot Limit Omaha event of the day. 170 entries participated with 23 players getting paid a min-cash of Rs.232.

The third event of the day saw 192 entries participate in this 40,000 guaranteed tournament. This was the only freezeout tournament of the day which featured a buy-in of Rs.200. 27 players were paid out With 400 being the mean payout.

Heads of battle took place between ‘pagal27’ and ‘abhimanyumittal’. pagal27 claimed the top prize of INR 8,860 when he beat abhimanyumittal in heads-up with the latter getting INR 5,980 as runner-up prize. In the final hand of the tournament, pagal27 crippled his opponent with a Queen high flush and then followed that with a set of Threes in the final hand against his opponent’s Two pairs.

We were now down to the biggest event of the night i.e. the Mini Biggie which is the LBS’s version of a highroller tournament. The Mini Biggie took place at 9:00 pm for a buy-in of INR 3,300 and a guaranteed prizepool of Rs.5 lakhs! From the 107 entries who participated, 15 top finishers made the money with a minimum assured sum of INR 9,000 going their way.

There were some notables in the top 10 finishers in this event including Anirban ‘pokernoob’ Das, Gokul Raj a.k.a Super Kings and ‘Investment banker’ all of whom finished in the top 10 positions. Heads-up battle took place between Sandeep Verma a.k.a. effuno and bangbang99. Our readers might remember Sandeep Burma as he was one of the 2.o.K winners in May at Spartan.

effuno was holding a 2:1 lead over his opponent when the final hand of the tournament happened with pocket Fives. A reraise to all-in had effuno putting in his million chip stack and banggang99 holding Ks Qc made the call for his tournament life. The board showed 2d Jh 6d 2h 9h giving effuno two pairs Fives and Twos while bangbang99 showed just a pair of Twos. With that hand, the pot and the title went effuno’s way a.k.a Sandeep Varma who won a sum of INR 1,27,750 while bangbang99 would have to settle for Rs.88,000 for a second place finish. The 33-year old is a mechanical engineer from Kerala, who completed his Masters in Race Car Aerodynamics from University of Southampton. Poker is the biggest passion in his life, apart from fitness and motor racing.

That was it for a roundup of the day 2 action at the Little Big Series taking place at The Spartan Poker.com. Tomorrow is the penultimate day of action at the LBS and it will feature another big tournament i.e. the Warmup event. Stay tuned to Gutshot magazine.com for all the updates from this series.