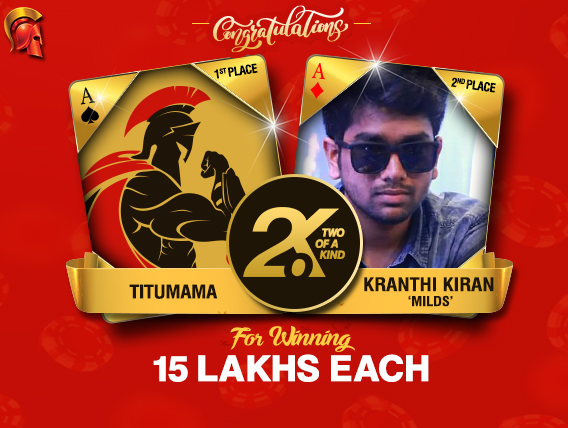 
The Spartan Poker hosts some of India’s biggest online poker tournaments throughout the year, and two of their most popular monthly tournaments are The Millionaire and the Two of a Kind tournaments, held on different Sundays of each month. These two attract the best poker pros from around the country, all wanting to take away top honours in these tournaments.

Yesterday was the first Sunday of the month and Spartan hosted September’s 2.o.K tournament last night, with a buy-in of INR 5,500 and a massive INR 15 lakh GTD to both the first and second place finishers. Yes, that’s the specialty of this tournament, with no bias to the top place, as the tournament ends when play boils down to the final two.

September’s 2.o.K began at 6pm IST last evening and it ran for nearly 11 hours, finally reaching an end at 4:58am this morning. A massive field of 1,100 entries registered to the tournament, and the players who walked away with top honours were ‘Titumama’ and Kranthi Kiran aka ‘Milds’, with both winning massive prizes of INR 15 lakh each!

This final hand was a fantastic one, with strike12 eventually missing the huge pay jump. He went all-in pre-flop with pocket Kings, while Kiran folded and Titumama called with Qc Ad. The flop opened Kd Td Jd Ac 7h and Titumama completed a straight on the flop itself, busting strike12 from the tournament, even though he completed a set of Kings on the flop. Another popular player who reached the final table was Anirban Das aka ‘pokernoob’, taking away over four lakh rupees for finishing fourth.

‘Titumama’ wished to stay anonymous after this big win, while Kiran is a known figure in the industry, so Gutshot decided to have a word with him after this major win. He said, “Happy to break the downswing with the biggest score so far. Entered the final table with an average stack. The tournament structure was good, and I was able to grind it out to the top.”

If you remember well, Kiran was also one of the few Destiny series winners, who won INR 10 lakh package trips to play in Las Vegas. Keep reading GutshotMagazine.com for similar updates on India’s top poker tournaments, both live and online.