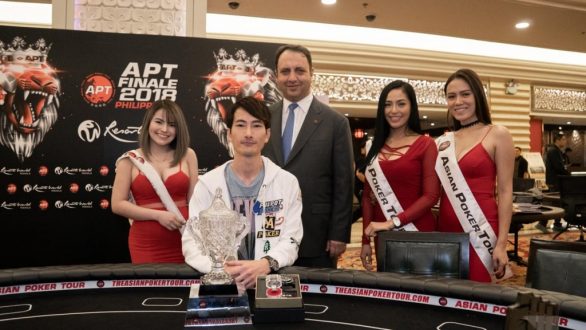 Kosei Ichinose is APT Finale Player of the Series


The Asian Poker Tour (APT) recently wrapped up proceedings at the Resorts World Manila where they played out the last day of their 2018 APT Finale, marking their last series of the year. The final four tournaments played out until they reached a winner and Japan’s Kosei Ichinose emerged as the best player of the series.

He cashed out in a total of four tournaments in the series which ran between 27 November and 6 December 2018, while also winning two titles. Earlier in the series, he won Event #9 PHP 107,500 Short Deck High Rollers Shot Clock, for which he won 168.92 APT Player of the Series (POS) points as well as the top prize of PHP 789,200.

With that, his position as the Player of the Series was confirmed, so long as Mike Takayama didn’t cash in the High Rollers Single Day Event, which was also yesterday. Takayama missed the pay-outs, in a tournament where only 2 people finished in the money, as Ichinose won the title.

Lim Yohwan aka ‘Boxer’ finished in 2nd place and he earned the APT Player of the Series runner-up trophy as well as $100 in cash. The third and final awardee was Filipino pro Mike Takayama who also cashed out in 4 tournaments, with a 2nd place in the APT-RWM Opening Event being his best finish.

For more updates on the top poker tournaments from across the globe, keep reading GutshotMagazine.com.