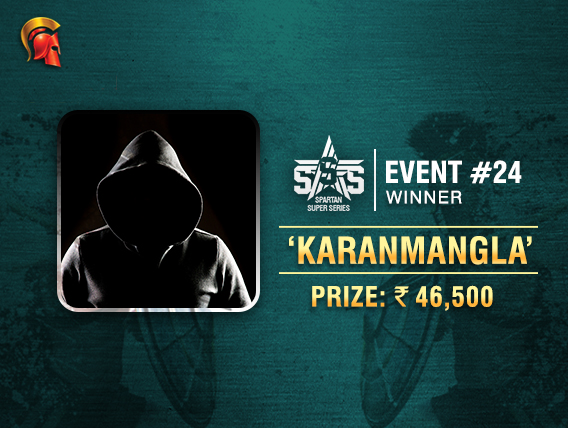 
The fifth day of the Spartan Super Series (SSS) kicked off yesterday on The Spartan Poker and a few tournaments were scheduled before the fourth tournament started last evening. This was the only freezeout tournament of the day and prior to it, ‘M@neyM@ker’ shipped Event #22 and Vaibhav Agrawal claimed the title in Event #23.

He outlasted all these entries and was awarded well for the effort, eventually beating ‘sharkfish’ in heads-up. The tournament ended in Level #41 where the blinds were at 6,900/13,800 – 1,380 and karanmangla held a chip lead of 7:1 before the final hand was played out.

In the final hand, sharkfish decided to shove all his chips into the pot before seeing the flop, with 3h As. karanmangla had enough of a lead to make the call regardless of what cards he held. He called with Qc 9c and both players revealed their cards for the showdown.

The hand turned out to be a disappointing one for sharkfish, with the board opening 9s Tc 9d 8s 7h and the player only managing a pair of Nines. karanmangla however, completed three of a kind Nines and took away all the chips from the pot while also winning an SSS title. sharkfish had to settle for the runners-up prize of INR 31,500. Keep reading GutshotMagazine.com for more updates on the Spartan Super Series.