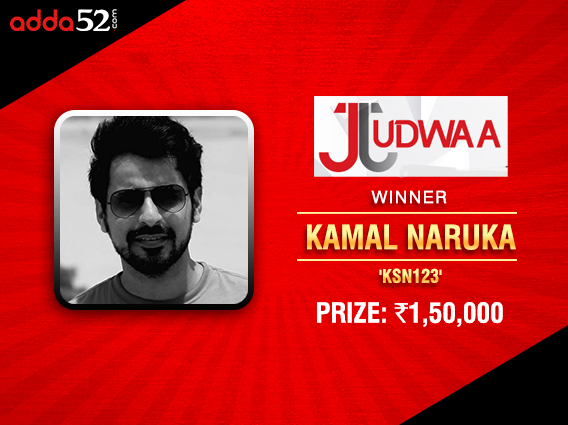 
Adda52 hosts a lot of high-value tournaments on most days of the week, but Tuesdays and Wednesdays in particular are known for the Judwaa INR 5 lakh GTD tournament. This tournament is played on both nights at the same time, with the same buy-in and with the same guaranteed prize pool.

Wednesday night’s Judwaa tournament then kicked off at 8pm as it does each week and this time, the INR 2,750 buy-in tournament saw a total field of 178 registered entries (108 players + 70 re-entries). The guarantee of INR 5 lakh was slightly missed, with the top 12 players eventually getting paid out.

Coming out on top of this field and shipping the Judwaa tournament for not the first or second time in his online poker career, but for the fourth time was Kamal Naruka, who plays on Adda52 under the name ‘ksn123’. He’s becoming a top contender when it comes to the Judwaa tournament each week.

Last night, he added another amount of INR 1,50,000 to his poker bankroll, beating this field and taking away the top prize. Everyone began with a starting stack of 10,000, but no other player had any chips left by 2:01 today morning when Naruka was crowned champion.

He beat ‘prempoonia’ in heads-up, who missed the big pay jump and had to settle for INR 95,000 for finishing second, which made Naruka the only player on the night to get a 6-figure score. Many other top players were on the Final Table, including ‘jason911’ who finished 3rd for INR 66,250 and Sahil Mahboobani aka ‘ImHighIshove’ who finished in 4th place for INR 52,500.

The featured tournaments will continue on Adda52, with another Godfather 5.0 tournament set to take place tonight, for a place in the Aussie SnG Finale. Keep reading GutshotMagazine.com for more updates on these tournaments.