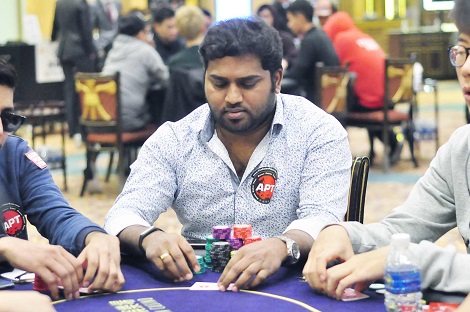 
PokerStars LIVE returned to Asia after a few months with the 2018 Red Dragon Jeju, South Korea series and it has been a great success so far, still halfway through the festivities. Yesterday, the KRW 12 million High Roller began at the Jeju Red Dragon and action was intense on Day 1, with 73 entries joining the field.

So far, the series hasn’t been a great one for Indian players, but this could be the game changer for Team India. Our very own high-stakes pro Kalyan Chakravarthy was among the 45 survivors who bagged up their chips to return for Day 2 of the High Roller which commences later today, 4th December.

The guarantee for this event was set at KRW 300 million and by the time the end of just the second 40-minute level, the number of entries had reached 38 to beat the guarantee and the registration will be open till 3:10pm local time today. We’re in for another guarantee being crushed at Jeju.

India’s Kalyan Chakravarthy Cheekuri has had a brilliant year when it comes to High Rollers, having made a couple of big victories, including shipping the WPT India High Roller in Goa last month. Prior to that, he won the 2018 Deepstack Championship in Las Vegas for a whopping career best of $147k.

February this year saw him finishing second in the Doupai Cup Main Event in Macau for another massive amount of $76k, so he will be looking to continue his streak of big scores in foreign locations. With a stack of 300k at the moment, Chakravarthy is 6th in chips from among the 45 players in play.

He will be up against some of Asia’s best pros including current chip leader Huahuan Feng from China who has 415k in chips, Baby Dragon Event winner James Won Lee, Michael Soyza and others. While Chakravarthy is the only Indian to progress from this tournament, Sumit Sapra has progressed to Day 2 of Event #9 Megastack with a decent chip stack.

Keep reading GutshotMagazine.com for more updates on the top poker tournaments in India, Asia and around the world.