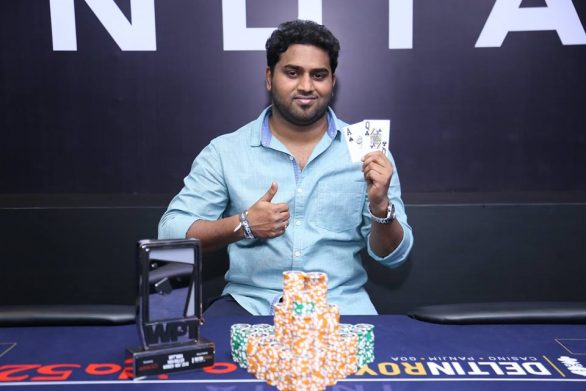 
The World Poker Tour (WPT) recently completed its second stop in India, with three tournaments scheduled to complete yesterday, 19th November 2018. One of the most anticipated ones was the WPT India Main Event, which concluded early last night as Nikunj Jhunjhunwala took down the title for INR 66+ lakh.

Another major tournament playing out its final day was the WPT India INR 100k Highroller and here, a total of 142 entries had registered after paying the steep entry fee. The massive prize pool was set to be distributed among the top 18 finishers in the tournament with a minimum cash prize of INR 2,45,000.

The day began with over 60 players still in contention and we were wondering whether players would need an extra day to end proceedings. However, it wasn’t required. A few hours after the Main Event winner was declared, we had our Highroller champion as well – Kalyan Chakravarthy.

A massive prize pool was generated and once the registration period ended, the prizes were calculated. INR 37,53,000 was kept aside for the eventual winner, while the top 18 would eventually finish in the money for a min-cash of INR 2,45,000. However, we actually had 19 players finishing in the money, in a rare case of two players sharing the 18th place prize. Alok Birewar (Bounty Event Champion) and Pranav Bagai busted together at different tables and they shared the first money prize.

The field was full of top names from the Indian poker fraternity and a number of them were sent to the rail as the night progressed. Some of them included Adda52 Team Pro Kunal Patni and Vivek Rughani, who finished 17th and 16th respectively for prizes of INR 2,45,000 each.

Sahil Agarwal, Mayank Jaggi (Ship IT Event runner-up) and Ashish Munot were a few other high-profile eliminations from the tournament, finishing 12th, 11th and 10th for INR 3,29,000 each. This set the 9-handed Final Table, with Chakravarthy in the chip lead. His night was brilliant as he managed to take advantage of this lead right till the end. 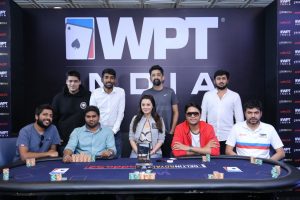 After a small break, Raghav Bansal was the first to exit the FT, busting in 9th place for INR 3,75,520 and he was soon followed by Kompella Ganesh, who lost to Abhinav Iyer’s pocket Sevens to cash in 8th place for INR 4,24,000. The next one to leave was Mayank Agarwal and he got unlucky when his pocket Nines lost to Chakravarthy’s pocket Fives; he finished 7th for INR 4,77,000.

Chakravarthy then strengthened his lead at the top, busting Aditya ‘Bitti’ Agarwal in 6th place, with the latter winning INR 5,51,000 in prize money. Another elimination for Chakravarthy came soon later when his pocket Threes busted Ankit Kapoor in 5th place for a cash prize of INR 6,58,000.

Chakravarthy turned out to be unstoppable on the night, with his pocket Tens completing a set against Abhinav Iyer’s Ac 9d. He executed another knockout and Iyer busted in 4th place for INR 8,46,000. We soon saw the first 7-figure cash prize being given away in this tournament with Amit Ajwani heading out in 3rd place for INR 14,03,000, losing to Chakravarthy’s Aces.

Chakravarthy then went into heads-up against Adda52 Celebrity Pro Minissha Lamba and it was always going to be tough for Lamba, given that Chakravarthy had such a massive chip stack after sending so many FT players to the rail. He maintained his chip lead right through the FT and in the final hand, Lamba’s Kd Qs lost to his As Qc. 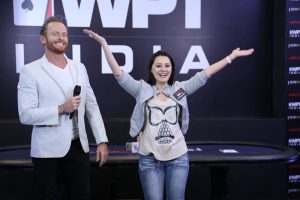 With this, Chakravarthy was crowned champion, winning the coveted title along with his maiden WPT Trophy and INR 37,53,000 in hard cash. On the other hand, Lamba wouldn’t be too disappointed either, bagging her biggest ever live cash of INR 23,63,000 for finishing second. As for Chakravarthy, he added another massive score to his bankroll, with his largest cash coming earlier this year when he won the DeepStack Championship in Las Vegas for $147k.