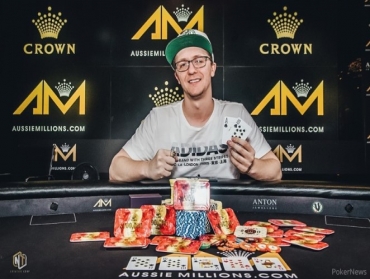 The 2020 edition of Aussie Millions raced with immense thunder. Marking an end to some of the prestigious tournaments in and around the eastern zone, Aussie Millions is fast approaching its end! The A$100k Challenge ran simultaneously with the Main Event and ultimately crowning the High Roller star Kahle Burns who defeated Alex Foxen in heads-up to seize the hefty 7-digits!

The tournament pulled out a total of 54 runners, but the field quickly whittled down to 21 advancing players on Day 1. It was Alex Foxen who vaulted into the lead after knocking out Stephen Chidwick to amass the leading stack 853,500 with the rest of the survivors to Day 2.

Burns initiated the day resting in the middle of the pack with 584,000 chips. Who would have known Australia’s high rolling player would conquer this field, second biggest in the event history! “This is my first tournament I have won on the Aussie Millions circuit and obviously it’s a fantastic one to win,” he said.

Starting in the middle of the pack at 8th position. Burns made his move up during a four-hour stretch. He shoved with Ace-King over a raise from Aaron van Blarcum and a call from Michael Zhang. When Blarcum called and Zhang shoved with Jacks and that’s when Burns found a King high on board and tripled up. “That sort of put me in an above-average stack spot and then I was able to accumulate some chips on the bubble,” Burns said. It was Zhang who unfortunately became the bubble boy of the tournament after being dominated by Bryn Kenney.

The heads-up play began between Alex Foxen and Burns after the elimination of Blarcum in the 3rd position. Burns made 200,000 on the button and Foxen shoved for 2.29 million with Ac 9s followed by a call from Burns who sat holding As 10s. Flop 8s 10c Kc was of little help to the latter, finding a pair. 9h and Qd on turn and river cemented Burns as the A$100k Challenge champion earning an incredible AUD 1,746,360 (~INR 8.51 Crores) while Foxen headed towards the payout desk.

The latest champion who was also inducted into the Australian Poker Hall of Fame really thrived in the year 2019. Sitting 2nd in Australia’s All-Time money list after adding 7-figure closely following the legend Joe Hachem. Snagging two WSOP bracelets, Burns boosted his total live earnings to $9.54 million! Recently, he also championed the partypoker MILLIONS UK $10,300 High Roller but nothing can beat his career-best 2017 Triton Macau Main Event earning $1.3 million. So, for the latest updates on poker news and tournaments around the world, keep reading GutshotMagazine.com and stay tuned!