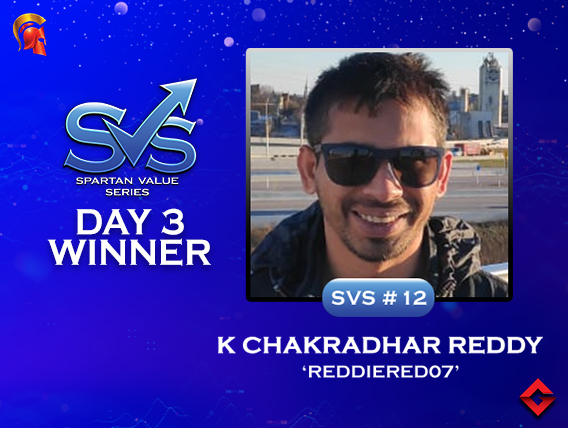 
The Spartan Value Series (SVS) is currently underway on Spartan Poker and by now the poker aficionados know that the leading platform is guaranteeing an enormous INR 48+ Lakhs GTD! And so was yesterday, lining up 4 tournaments and the worthy winners walked out with their hard-earned prize money. Here is a complete summary of SVS Day 3…

The first event came with the lowest buy-in of INR 165 and a total number of 257 players entered the tournament. The advertised guarantee was passed, generating a prize pool of INR 38,550 and the top 20 places received a paycheck of a min-cash INR 516. Powering through the field was ‘spartan222’ pushing ‘kumarh5’ in the runner-up position and pocketing INR 9,252 in prize money.

It was online grinder K Chakradhar Reddy who shipped the second tournament after outlasting a field of 185 entries. The buy-in of INR 550 by each one of these unique players smashed the assured amount, creating a bigger prize pool of INR 92,500 and the top 17 finishers walked out with a min-cash of INR 1,452. Reddy defeated ‘Rvjn91’ in heads-up to boost his poker bankroll by adding the prize money after the latter couldn’t dominate the former’s two pairs of Aces and Nines.

A buy-in of INR 275 was charged to enter the tournament and eventually 112 players enrolled in the third tournament of the day. Before the competition came to a standstill, only a handful of 9 players were assured to walk out with a min-cash of INR 1,050. It was ‘radda’ who came on top, giving an outstanding performance after railing out ‘Kushanna’Empire’ in heads-up for INR 10,202.

The event came with a bigger guarantee of INR 1.2 Lakhs! Slightly surpassing the guarantee amount as 155 players enrolled for INR 880 buy-in. The star of the night and the one to earn the biggest prize money was ‘Jai Bajrangbali’ eliminating ‘sid97’ in heads-up.

In level #32, ‘Jai Bajrangbali’ held As 7d up against ‘sid97’ who had Js Jd. Pre-flop saw the entire chip stack of the latter in the middle and a call from the former. ‘Jai Bajrangbali’ obtained pair of Aces after the board ran Td 2s Ac 4h Kh and that’s when ‘sid97’ showed his pocket jacks, unable to dominate the former who was declared the ultimate winner.

This was the last tournament of SVS Day 3 which pulled out 189 players in total for a fixed buy-in of INR 1,650. Before the tournament announced the ultimate winner, the top 18 places strolled out with their min-cash of INR 6,400. A standout performance was given by ‘whateverhaha’ who pushed away ‘rajnifan’ in the runner-up position after the two struck a heads-up deal.

The January edition’s Millionaire Lite is finally underway and has already gained immense popularity because the buy-in is as low as INR 1,650. This SVS version of Millionaire guarantees INR 10 Lakh to the first place. Day 1A itself was a success after 767 players enrolled to battle it out. Powering through this massive field was ‘Sadiq22’ who accumulated the largest stack of 2,17,674 followed by the second chip leader and well-known circuit grinder Sagar Choudhury aka ‘Gal Godot’ who bagged 2,12,057 chips.