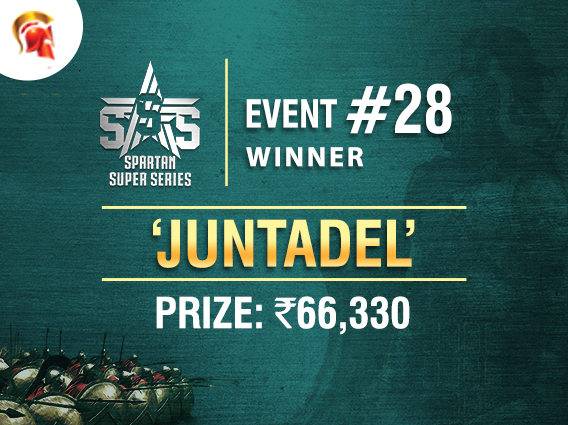 
The second Spartan Super Series event took place late afternoon on Saturday and featured a buy-in of INR 990. This Re-entry format tournament featured a guaranteed prizepool of INR 3 Lakhs. Claiming the lion’s share of that prizepool was ‘JuntaDel’ who outlasted the field of 192 entries on his way to the title at The Spartan Poker.

The field in this tournament squeeked past its guarantee to settle at INR 3,01,500 with 27 players getting to share in the riches. Min-cash was INR 2,713. Well known regs including SSS title winners in the past few days once again made the money. These included Arjanveer ‘instrumental’ Chadha, Anirban ‘pokernoob’ Das and Vinay ‘Dhanaj Seth’ Choudhry who ran well but failed to make the final table in this one. A title winner who did make it to the FT was Wednesday night’s MegaStack (Lite) winner in JuntaDel and when the field got trimmed down to the final three, it was JuntaDel going up against ‘honey339’ and ‘NICK14’ for the title.

JuntaDel was also in the lead when there were four players left holding just over a million in chips against his opponents. honey339 however took over the chipleader position when he eliminated ‘aloo_paratha’ with a pair of Eights against the latter’s Ace high. The lead however was very slight and was lost soon after when NICK14 rivered a straight against honey399’s pocket Nines. Most of the bigger pots were being contested between these two players while JuntaDel played it cool awaiting an opportunity to eliminate one of these players to get into headsup for the title.

It soon transpired that there would be no heads-up as the final hand of the tournament proved to be a double elimination. honey339 (Jh Qc) min-raised in preflop action which was called by NICK14 (7c 9c) and JuntaDel (6h Th) who were in the small and big blind respectively. Both players flatted to see the flop. It was definitely and action flop of Jc 6c Td honey399 hitting top pair, JuntaDel hitting two pair and NICK14 also got a piece of that with a gutshot draw. Predictably all the chips from all three went into the middle but JuntaDel’s holdings held firm on the turn (4h) and river (9s) cards.

With that double whammy, we had our doubel title winner in JuntaDel who scored a first place prize of INR 66,330. For 2nd place, honey399 got INR 44,923 and NICK14 rounded off the top 3 payouts with his score of INR 30,903. Stay tuned to GutshotMagazine.com as we will shortly bring you an update from the featured tournament of the evening in the DareDevil.