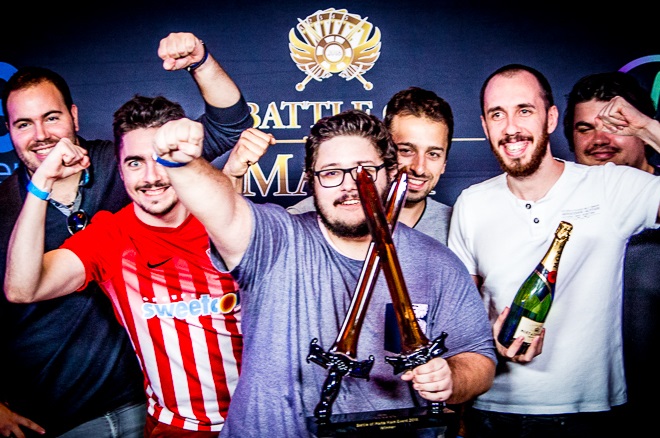 Next to go was UCOP Leaderboard winner Mateusz Moolhuizen in 8th place. Reduced to just 2 million chips from the 8.6 million he started the day with, he pushed with Q-9 and got looked up by Maxime Canevet dominating with A-9. Moolhuizen picked up €30,000, as well as the €1,500 package to MPNPT Tallinn which he won in the MPNPT qualifiers’ last longer promotion. Canevet meanwhile moved even further into the lead – and then picked up even more chips busting Gustav Vadenbring in seventh place for €41,000 not long after.

Sixth place (€53,000) went to Grosvenor Poker Ambassador Andy Hills, who was outdrawn by an ecstatic Erik Ostergaard, and soon after Hills’ departure the remaining five players struck a deal. €50,000 would go to first place, €23,000 for second, and the rest would be awarded in the following amounts:

Within minutes of the deal being agreed, Abdallah Fakhreddine was eliminated in fifth place; his mother – who he left in charge of his chain of hair salons in Dubai – will presumably be pleased with the €108,500 he’s taking home. Fourth place (€121,500) went to MPNPT Tallinn finalist and tour regular Mantas Urbonas, who shoved with A-Q only to get cold-decked by Erik Ostergaard’s pocket aces. Third place then promptly went to the same Erik Ostergaard who, having played very aggressively throughout the final, misjudged a shove with J-T against Julien Stropoli’s Q-J for a €139,500 payday, leaving the two Frenchmen Canevet and Stropoli heads up. 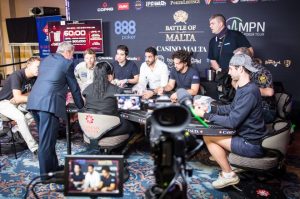 Stropoli was in possession of the chip lead by this point, and just a few hands into the heads up, he raised with 5-3 and Canevet, looking down at pocket kings, reraised. Canevet bet out on the J-4-3 flop and Stropoli flatted, before all the chips went in on the crucial 5 turn. The river couldn’t help Canevet, who took home €192,000 according to the terms of the deal, while Stropoli got €168,500 but, more importantly, the trophy and the eternal glory of the 2018 MPNPT @ Battle of Malta title.

The MPN Poker Tour will be back next January 24-27 in Tallinn with all the poker, parties and personalities that tour regulars have come to expect; online satellites are running now on the MPN Poker Tour’s partner sites. Keep reading GutshotMagazine.com for more updates.

Check out our online poker rooms section, where you can read reviews on the biggest and best poker rooms in the country, while also taking advantage of their bonuses and promotions. Check