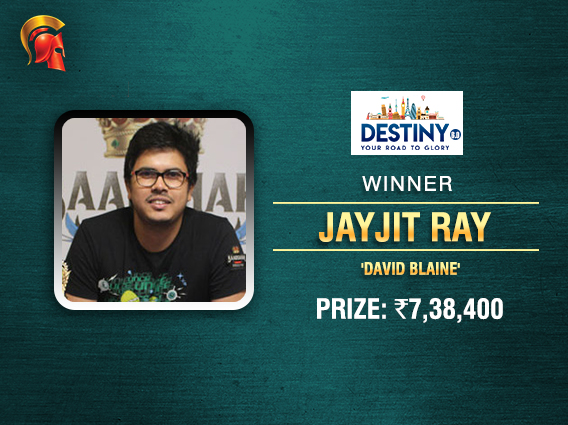 
Jayjit Ray is a known figure in the Indian poker industry now, with quite a few online victories across all the major platforms, to go with a couple of major live poker titles as well. In recent times, his run has been pretty good too, starting with an SSS title that he won in August on Spartan, where he plays under the name ‘David Blaine’.

Ray then decided to take down a major live tournament, shipping the BLT Highroller in Goa in October, beating Rajeev Kanjani in heads-up after hours of grinding at the tables. He followed this up with a victory on PokerBaazi as well where he plays under the screen name ‘england’, shipping the Summit also in October.

Now, he’s made another huge bankroll addition, shipping one of Spartan’s signature tournaments. Every Wednesday night, The Spartan Poker hosts the INR 20 lakh GTD Destiny tournament on their platform, which gives players the chance to be a part of the huge prize pool, while also being able to play for an INR 10 lakh package trip to Europe.

Ray was a part of yesterday’s 568-entry field and he was dominating on the night, powering through his opponents one by one. Yesterday’s field was as tough as it is every Wednesday on Spartan, with every pro in the country wanting to fly abroad and multiple his/her winnings at a prestigious poker festival in Europe.

The tournament has a buy-in of INR 5,500 and for those who finish in the money, there’s always high value for money involved. The guarantee was absolutely smashed last night as the field took the prize pool all the way up to INR 28.4 lakh, eventually distributed with minimum cash prizes of INR 14,200 going to the top 50 places.

Some of the Spartan regulars that cashed out in yesterday’s Destiny 7.0 tournament were Anirban Das aka ‘pokernoob’ (50th), Manoj Pentakota aka ‘MRBLUE’ (44th), Arjanveer Chadha aka ‘instrumental’ (33rd), Mayank Jaggi aka ‘alwayslimpAA’ (31st), Apratim Sharma aka ‘checm@te’ (28th), and Gokul Raj aka ‘Super Kings’ (9th).

From there, the bigger prizes began, and the intensity levels rose as many top players featured on the Final Table. One of them was Ashish Ahuja aka ‘Spewushhhiiiii’ who has been on a good run in recent times, finishing 5th last night for a prize of INR 1,19,280. Another Spartan regular who busted right before the end was Sumit Sapra aka ‘mrgr33n’, who was so close yet so far from winning.

Sapra was up against Jayjit Ray in heads-up and even though both were guaranteed big prizes, there was a seat into the INR 10 lakh Europe Finale SnG at stake. Eventually, it was Ray who emerged victorious and took away the overwhelming top prize INR 7,38,400, from where INR 1 lakh will be deducted as an entry into the Finale SnG.

Gutshot caught up with Ray after this victory and he had this to say – “I’m really happy to win the Destiny on The Spartan Poker after I FT bubbled twice in this tournament in the past. Now, I’m looking forward to winning the SNG.”

After creating a 7:1 chip lead, Ray’s pair of Eights beat Sapra’s high card Ace in the final hand. Sapra took away INR 4,54,400 for finishing second, ending a pretty fulfilling day in poker for the pro. Let’s remind you that Sapra is currently in Jeju participating in the Red Dragon Main Event, where he became the only Indian to progress from the first starting flight, among a total of 141 survivors.