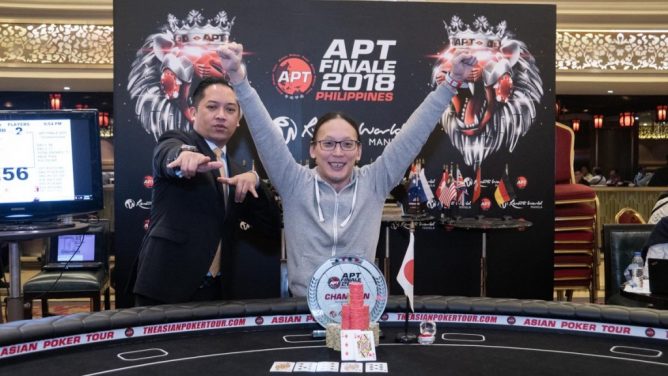 
What a fantastic day of poker action this turned out to be at Resorts World Manila, Philippines. The Asian Poker Tour (APT) was hosting their final stop of the year called the APT Finale Manila and the PHP 165,000 buy-in Championships Event is the latest to conclude in Manila.

The event wrapped up one day earlier than scheduled due to a low turnout of 71 entries and the final day began yesterday with only 8 contenders left to battle it out for all the fame and glory. India’s WSOP bracelet boy Aditya Sushant was also in the mix, but he ended a brilliant run when he busted in 4th place for a prize of PHP 973,300 (~INR 13.02 lakh).

Australia’s Bobby Zhang had executed most of the eliminations on the FT and he had created skyscrapers with his chip stacks, only to start losing them to Japan’s Iori Yogo in 3-way play. Soon, Zhang went from chip lead to busto to end in third place after he and Yogo went head to head for several big pots.

Then, heads-up went on for quite a while between Yogo and Malaysia’s Anthony Thong Boon Tee. Tee had recovered from a very short stack after watching Yogo and Zhang having a go at each other in 3-way play. He gave himself plenty of chances but eventually, he had to settle for the runner-up position as Yogo took down the title and the coveted APT Championship Ring.

Mind you, this isn’t Yogo’s first big victory, having also won the APT Korea Championships Main Event in August this year. The Japanese pro collected the top prize of PHP 2,872,800 (~INR 38.55 lakh) and made another big addition to his career live winnings, taking his tally past $1.2 million.

The field was loaded with some of the best pros from across Asia and this turned out to be a brilliant achievement for the Japanese player, who is turning out to be one to watch out for in such major Asian poker tournaments. Today is the final day of the APT Finale Manila 2018 and you can get all updates form that series here on GutshotMagazine.com.