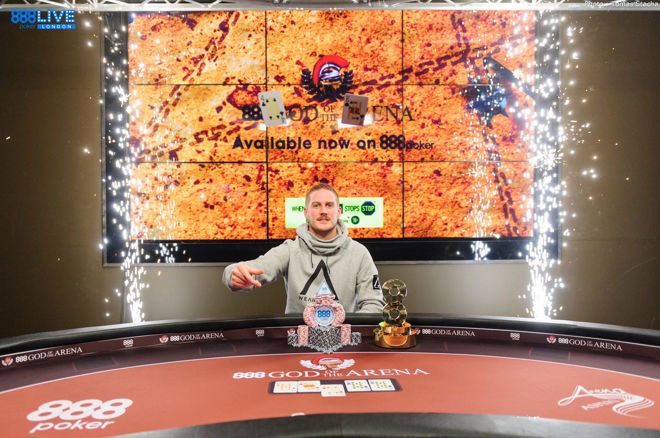 
The 2018 888poker LIVE Festival saw its final day yesterday. The series is being hosted by 888poker, one of the well-known poker brands in the European market. The festival began on Nov 22 at the Aspers Casino at Westfield Stratford City, England, and went on for a period of 12 days, culminating in the Main Event Final Day yesterday.

It was the homeboy, British poker pro and cash game specialist James Williams who shipped the event, taking home the 1st place cash prize of GBP 121,000 (~INR 1.09 Crores). He beat the fellow countryman and recreational player Derek Lawless in heads-up to bag the title and the lion’s share of the prize pool.

The Final Table gameplay went till 2.30am in the night, testing the endurance of players, but when it came to the heads-up, it didn’t last long. Lawless was caught bluffing twice, which enabled Williams to swiftly cash out the 1st place prize money as well as the trophy. In the final hand, Lawless raised with Ah Jh and Williams called with Ks 4c. The Kh 9d 4h flop made Lawless bet 950K and hope for a nutflush draw, but the turn and river of 10s 10c disappointed him, and Williams took the game with his two-pair.

The champion, Williams, has played live poker from 2009, and has since then ranked highly in tournaments all over Europe, mostly in England. His biggest cash win was way back in 2009, when he finished 2nd in the 2009 Grosvenor UK Poker Tour for $86,946. The 2018 888poker LIVE win makes it the biggest live win of his career, crushing the record he made in 2009.

Another notable player to cash out big were Antoine Labat at 3rd. He finished 9th in the 2018 WSOP Main Event back in July this year.