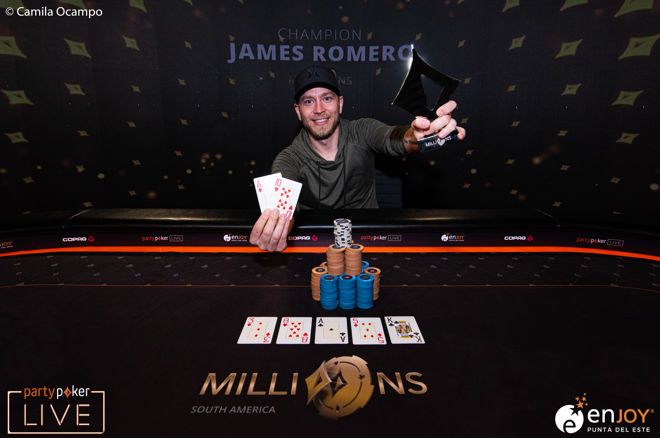 
2020 partypoker MILLIONS South America is currently running at the Punta del Este Resort and Casino in Uruguay. And the United States James Romero is a partypoker LIVE MILLIONS latest champion seizing the Super High Roller defeating Marty Mathis in heads-up and pocketing an impressive $350,000 in prize money with the trophy.

A total of 35 runners entered the tournament but by the end of the 12 levels on Day 1 the field narrowed down to 15 players after Antony Zinno, Freek Scholten, Kenney Hallaert, Lander Lijo all bust on Day 1.

The final table of eight was reached and the first casualty was partypoker pro Dzmitry Urbanovich. Unfortunately, Farrell became the bubble boy of the tournament with his elimination in the 6th place, failing to dominate Jacob Daniels. After the money bubble bust, Daniels was sitting at the top of the list. Despite his commanding stack, he left the table in the 3rd place. And now, Romero was up against Mathis in heads-up, the chip lead exchanged hand a couple of times before Romero took charge. The tournament ended with Romero’s Ad 10h remained undefeated Mathi’s Qd Jh.

This result came after his third-place finish in the partypoker MILLIONS UK Main Event for $420,000, his second-biggest winning cash so far. Now, with this victory, the champion has boosted his total live earnings to $4.7 million, sitting 2nd in Oregon’s all-time money list.