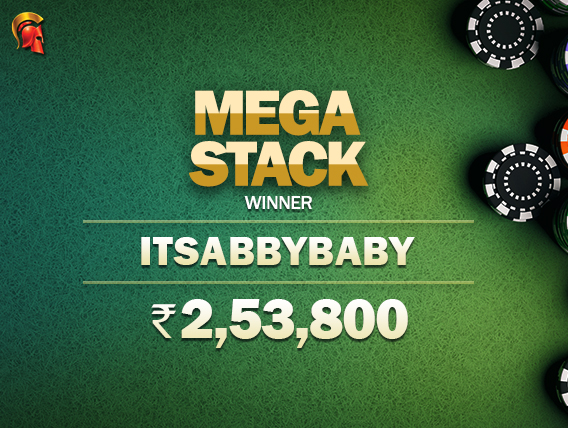 
Featured online poker tournaments take place every day on The Spartan Poker, which is one of India’s best poker companies since a few years now. These tournaments vary in buy-ins and prize pools and yesterday’s tournament was the Mega Stack which had a buy-in of INR 3,300 and a guaranteed prize pool of INR 12 lakh.

The tournament began at 7:30 pm IST last evening and after over 6 hours of grinding, it came to an end at 1:44 am this morning. 345 entries were registered to this Tuesday’s Mega Stack and the prize pool was distributed among the top 31 players, with a minimum cash prize of INR 10,560.

Reaching heads-up in this tournament were ‘Itsabbybaby’ and ‘Girafganger8’, with the former building a lead of over 5:1 in heads-up. Eventually, it came to an end in Level #57 when the blinds were running 27,500/55,000 – 5,500 and Girafganger8 called his opponent’s all-in before the flop was dealt.

The winners were unable to make any comment on their big wins for first and second place, but we’re sure they would’ve enjoyed the experience. Itsabbybaby was awarded a massive prize of INR 2,53,800 while Girafganger8 wouldn’t be too disappointed either, taking home a prize of INR 1,70,880 for second place.

Keep reading GutshotMagazine.com for a daily update on major online and live poker tournaments in India and around the world.