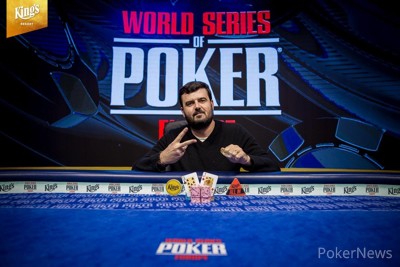 
The 2018 World Series of Poker Europe (WSOPE) has been taking place since the last couple of weeks at the Kings Casino in Rozvadov, Czech Republic. So far, a total of five events have concluded at the series with five WSOP gold bracelets being given out. Of these, more than half (3) have been presented to Israeli poker players, who are clearly dominating this prestigious series.

This is Europe’s biggest poker tournament series and players from several countries have made their way to the venue to participate, with Event #5: €1,100 MONSTER STACK No-Limit Hold’em becoming the latest to conclude and another Israel player in Timur Margolin being crowned champion.

It was a good tournament for India’s Dhawal Lachhwani too, who was among the final 14 players to hit the felts on Day 3. However, Lachhwani couldn’t continue his good run, eventually busting in 10th place for a prize of €6,949 (~INR 5.86 lakh). While he would’ve been hopeful of bringing home a gold bracelet, this was still a brilliant effort, cashing high from a total field of 666 entries.

As for Margolin, he would’ve been over the moon with this victory. Just a few months back, the player won his maiden WSOP bracelet in Las Vegas for a prize of $507k, and now he has his second bracelet, to go with the Monster Stack Event top prize of €134,407 (~INR 1.13 crore).

Speaking about Israel’s third bracelet of the series, Margolin said, “Amazing, it feels awesome. I was sitting at home watching the live stream and seeing what the boys were doing so I said I have to come to King’s Casino. This was the first tournament I played here and managed to bink it.” He has now taken his live poker earnings to $1.7+ million.

Keep reading GutshotMagazine.com for timely updates on the WSOP Europe series as well as other poker stories from around the world.