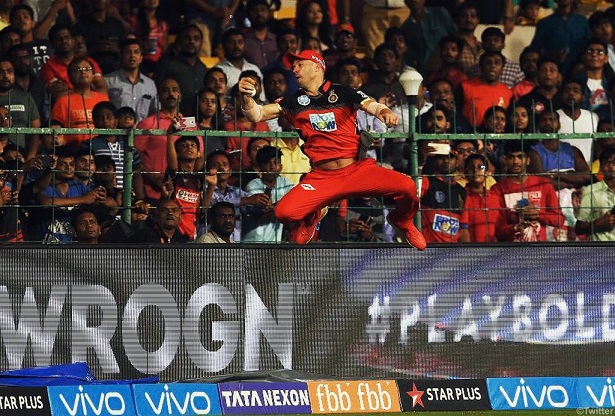 
“That was Spiderman stuff. You don’t do that as normal human beings,” said Virat Kohli about ABD, who took the catch of IPL 2018 last night. Probably the catch of the Indian Premier League. ABD’s athleticism, poor bowling, good hitting, some bad catching and some out-of-this world catching is what characterized yesterday’ IPL 2018 match.

It was another must-win game for Royal Challengers Bangalore, who were playing their season’s last game at home, against a Sunrisers Hyderabad team that have already qualified for the playoffs. Hyderabad won the toss and elected to field, something Bangalore wouldn’t mind, given their opponent’s uncanny ability to win while defending totals.

38/2 with both openers (Parthiv and Kohli) back in the hut wasn’t a very good sign for the home team, but AB de Villiers and Moeen Ali consolidated for a few overs before launching an all-out attack on the SRH bowlers. Moeen started the attack, hitting 5 sixes before he first hit a four, and then ABD took over, hitting 12 boundaries and a monstrous six that went out of the ground. He now has 3 of the top 5 biggest sixes in IPL 2018.

ABD was dismissed for 69 and Moeen followed him shortly for 65 but having proved his selection in the team. 5 overs were still to be played when the pair was dismissed, and Colin de Grandhomme hit 40(17) to take RCB to a massive score of 218/6. Young Afghanistan leg spinner Rashid Khan finished with 3/27 and took the vital wickets of Kohli, ABD and Moeen.

The chase was a well-timed one and even though they lost Shikhar Dhawan early, the required rate was kept in check due to some beautiful cricket from captain Kane Williamson, who ended with 81(42). Alex Hales was playing good as well, until he was dismissed for 37 thanks to an acrobatic one-handed catch by ABD on the boundary. Call him Superman, Spiderman or any of the Avengers, but you won’t see many better catches than that in cricket. Unbelievable stuff from the South African!

The game went down to the final over, with 20 runs needed and Mohammed Siraj handed the responsibility of taking his team home. Manish Pandey was at the crease but his 62* was not enough as Bangalore won by 14 runs and completed a hat-trick of wins in IPL 2018.