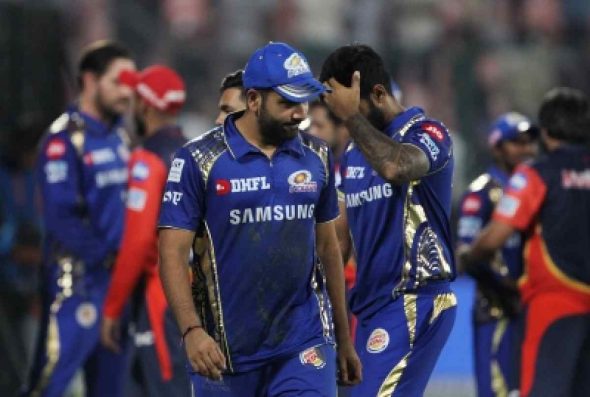 IPL 2018: Mumbai lose and get knocked out


It was the final day of the IPL 2018 round robin stage. Mumbai Indians had qualification to the playoffs in mind while Delhi Daredevils were here to play party poopers. The game was being played at the Kotla and Delhi won the toss and elected to bat first, playing three overseas bowlers and one batsman.

The equation was simple for Mumbai – win and qualify for the playoffs, which would simultaneously knock out Rajasthan Royals and Kings XI Punjab. They brought in Mustafizur Rahman as a replacement for Mitchell McClenaghan who was out with a small niggle, but they clearly missed the Kiwi with the ball.

Delhi managed to put up a competitive score of 174/4 even though they lost a few early wickets. Once again, it was young Rishabh Pant who led the counter-attack, scoring 64(44) in an innings that included two one-handed sixes. He regained the Orange Cap, missing the 700-run mark by just 16 runs.

Chasing 175, Mumbai needed a good start and Suryakumar Yadav gave them that, hitting 12 runs off the first three balls but it was the 17-year old Sandeep Lamichhane who had the last laugh, dismissing Yadav on the fourth ball. Mumbai then lost wickets in a cluster, falling from 74/2 to 78/5.

MI Captain Rohit Sharma demoted himself to number 5 but that wasn’t a very wise move, as wickets kept falling and it was left to Ben Cutting to score 53 runs off the last 30 balls, with not many partners left. He did well to dominate the strike during the 9th wicket partnership, taking it to just 18 required off the last over.

Harshal Patel was then handed the responsibility to bowl the final over and Cutting began the over with a six, only to be caught at mid-wicket on the second ball and all hopes of qualification disappeared. MI lost by 11 runs and they weren’t able to complete that dream comeback that most of their fans thought would happen this season!

Some fantastic bowling in the middle overs allowed Delhi this victory, bowing out with two consecutive wins. Amit Mishra and Lamichhane bowled in tandem and finished with joint figures of 8-0-55-6. Now, the battle for the last playoff spot was between Kings XI Punjab and Rajasthan Royals. Man of the Match: Amit Mishra.