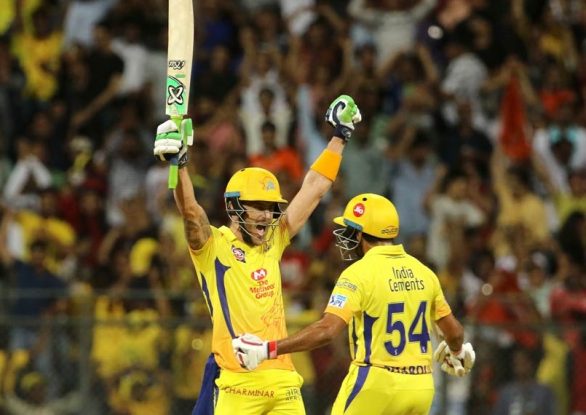 
Chennai Super Kings were favourites coming into last night’s IPL 2018 Qualifier 1. They were up against Sunrisers Hyderabad, the table toppers who Chennai already defeated twice in the round robin stage. The match was being played at the Wankhede Stadium in Mumbai and Chennai opted to field first after winning the toss.

Now everyone knew that Sunrisers don’t have a great batting order but not many would’ve expected such a bad collapse either, as they lost Shikhar Dhawan on the very first ball of the game and then lost regular wickets every over or two. The team found themselves at 88/6 at the end of the 15th over.

The Wankhede pitch has always been a good one for batting and when SRH scored 139/7 in their 20 overs, it was almost curtains for this team that came into this qualifier match with three consecutive losses. A much lower score was initially expected but Carlos Brathwaite hit four sixes at the end of the innings, to finish with an unbeaten 43 in 29 balls.

Now Hyderabad have the best bowling attack in the league but how many times can the bowlers cover up for poor shows by their batsmen? They began well by getting Shane Watson for a duck and then capitalized by dismissing Ambati Rayudu and Suresh Raina off consecutive balls, courtesy some brilliant bowling by Siddarth Kaul.

Rashid Khan proved magical in the middle overs once again, accounting for the wickets of CSK captain MS Dhoni and then of Dwayne Bravo, finishing with outstanding T20 figures of 2/11 in 4 overs. More wickets followed and from 113/8, Chennai were left with a mountain to climb, needing 27 off the last 13 balls and no one except Faf du Plessis could make this possible.

A couple of inside and outside edges off the blade of Shardul Thakur and another smashing shot for four down the ground got Chennai 17 runs in the 19th over and what looked like an impossible task a few minutes back, now looked very achievable. The death overs specialist, Bhuvneshwar Kumar ran in to bowl the final over with only 6 to defend and du Plessis made short work of it, smashing a maximum straight down the ground.

With that, Chennai completed a remarkable turnaround win with 5 balls to spare and marched straight into the IPL 2018 final, while Sunrisers will get another chance in Qualifier 2, going into it with 4 consecutive losses. It was a real champion innings of 67(42)* from Faf, who wasn’t even a regular part of the side this season. Man of the Match: Faf du Plessis.

Who will face Chennai in the final? Kolkata, Rajasthan, or Hyderabad? Comment and let us know your views. Also, stay tuned to GutshotMagazine.com for regular cricket updates and IPL match results.