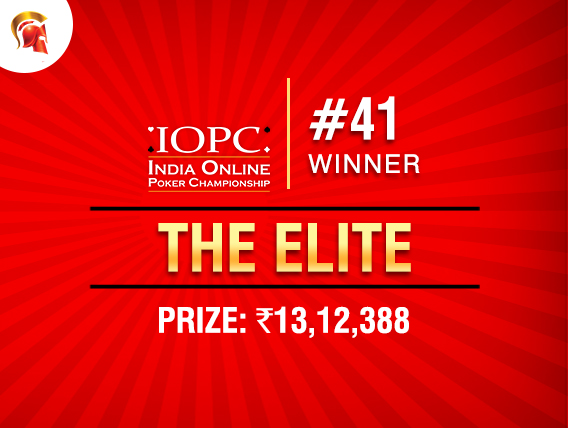 IOPC: ‘humdo’ wins The Elite on The Spartan Poker


It was the fourth tournament of the day in the ongoing India Online Poker Championship (IOPC), where over INR 7 crore is being given away in guaranteed prizes between 13-22 July 2018. It was Day 8 of the series and Event #41 kicked off yesterday evening at 7:30pm IST.

IOPC Event #41 was the featured tournament of the day on The Spartan Poker – The Elite. It was a long grind that ended way past midnight and at the end of it all, ‘humdo’ was declared the champion of this mega INR 40 lakh GTD tournament, which was one of the biggest in the series.

The tournament had a massive buy-in of INR 27,500 and with 237 entries being recorded, the guarantee was crushed and a new prize pool of INR 59,25,000 was created, of which humdo bagged the major share. It would’ve been a big day for the poker player, who took home the grand prize of INR 13,12,388.

The top 27 finishers took home INR 59,250. It was popular online grinder ‘stupefy’ who reached heads-up against humdo, a player who has won countless titles on Spartan. He wouldn’t be too disappointed either as he took home a pretty big prize of INR 8,85,788 for runners-up.

After this big win, both players will have their eyes on making a finish in the top 10 on the IOPC Leaderboard. They haven’t finished in the top two of any previous tournaments but this big tournament would’ve given them vital points towards the leaderboard, where INR 30+ lakh is up for grabs.

Keep an eye on GutshotMagazine.com where we will bring to you daily updates on the ongoing IOPC on The Spartan Poker, with 2 days of play left.