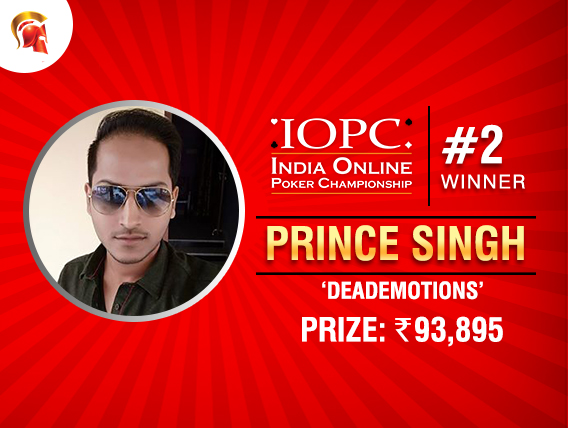 “The IOPC tournament is a platform where poker players from across the globe can prove their mettle in the sport,” said Co-Founder and Managing Director of The Spartan Poker, Amin Rozani. Truly, the IOPC is a tournament where the best players get to prove themselves, and the tournament series kicked off yesterday, with ‘grind121’ winning the opening tournament for nearly one lakh rupees.

IOPC Event #2 INR 3 Lac GTD (550 RE) was the second tournament of the day and of the series and once again, the guarantee was crushed. A new prize pool of INR 4,86,500 was created, with 973 entries registering to the event. It kicked off at 4pm IST and lasted 6 hours, 8 minutes before a winner was crowned. In all, the top 71 places were paid out a minimum cash prize of INR 1,848.

Prince Singh aka ‘DeadEmotions’ was the player to be crowned winner in this tournament, beating IPC (India Poker Championship) Award winner Jason Pereira aka ‘OMGMinerals’ in heads-up and taking home INR 93,894 for the top prize. Singh managed to take down the title in Level #48 of the tournament, with blinds running at 35,000/70,000 – 8,750.

He had a chip lead of around 3.5:1 before the final hand took place. Holding 10-A, he went all-in pre-flop and Pereira called with 9-A, as the flop opened 10-4-3 and Singh took an immediate lead. 3 and Q opened on the turn and river and Singh took down the pot with two pairs – Tens and Threes, while Pereira only managed a pair of threes from the board, while taking home INR 59,158 for second place.

Gutshot caught up with the winner, Prince Singh, after this win. The 23-year old is a Mumbai-based poker player from Bihar who got introduced to poker house games by college classmates and seniors. “Earlier I used to think it’s just a card game where luck in needed. Lately, I explored the dynamics of game and realised it’s much more than that… I started taking help from my seniors and keep on improving. PokerBaazi is like home to me. That’s where it all started, before I started exploring other poker websites. My biggest win came last month in PPL PLO highroller which I played after winning a satellite. I finished 2nd for INR 4.47 lakh and that boosted my confidence.”

About this tournament win, he said, “Shipping an IOPC event feels great as it was a huge field. A crucial hand in the tourney was 68 from cut off position. UTG opened 3x and I called from 68 suited from cutoff. It was a three-way pot post flop. With almost same chip counts, I picked up open ended on flop. I matched his bet again and, on the turn, I completed my straight. He shoved, and I doubled up for a good chip count.”

Singh also spoke about changes that poker has brought into his life and what future plans he has in the sport. He said, “Poker has brought many changes in me. It made me calm and composed, reduced my aggression and brought a lot of patience in me. Right now, I’m doing my MBA and playing poker simultaneously. My plans for future are to keep playing for the rest of my life along with whatever I do. The most compulsory thing in poker is managing bankroll and not jumping to higher stakes. One should master the stakes he plays and then take a step forward.”

“My family didn’t support me earlier and they thought it’s a waste of time. I showed them my winnings from the PLO HR win which helped a lot. I explained the game to my father. When he got a little idea, he supported me,” he said about his family’s support, on a parting note.