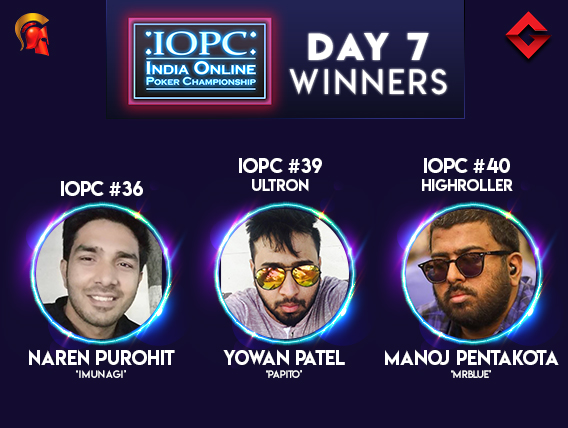 
INR 16 Crore GTD series guarantee in India Online Poker Championship (IOPC) is gaining momentum. With a massive number of poker fanatics enrolling each day, the platform is quite excited to hand over hefty bundles of cash prizes. Yesterday wrapped up Day 7 of the same hosting 5 tournaments and crowning individual winners. So, let’s take a quick look at IOPC Day 7…

Each IOPC day begins with a smaller buy-in tournament and so was yesterday that displayed INR 550. The entire event saw 696 entrants which led to the creation of INR 3.48 Lakhs in the prize pool and 47 finishers made it in the money for a min-cash of INR 1,983. A prominent face in the poker circuit Naren Purohit aka ‘IMUNAGI’ was announced as the official titleholder after a heads-up deal with ‘thepokerbrat’.

The next tournament was Afternoon Hi-Fi saw an increased buy-in of INR 1,100 yet pulling out a strong field of 594 entries. INR 3,420 was the min-cash given out to the top finishers. In level 41 of the tournament, ‘its my turn’ holding pocket Fives was up against ‘propernit’ with pocket Kings and the board ran 4s 6h 3h 7c Jc and ‘its my turn’ tossed over his straight 7-3 eliminating ‘propernit’ in the runner-up position.

INR 770 was a buy-in to enter the third tournament of the day which eventually pulled out 574 players in total. The top 39 places earned a min-cash INR 2,772 for their efforts from the prize pool but the one to pocket the biggest share was ‘CYCLONE 1121’ ending the tournament with a heads-up deal and placing ‘ip007’ in the runner-up position.

The assured amount was crushed to generate a bigger prize pool of INR 32.64 Lakhs that was distributed among the top 71 places for a min-cash of INR 12,403. The Thursday feature tournament Ultron was came roaring with 816 entries. After hours of grinding and eliminating players, Yowan Patel aka ‘PAPITO’ turned out to be the last man standing after a heads-up deal sending away ‘GODSENT’ to the runner-up position.

Gutshot caught up with the champ who said, “It was a good grind and I ran good at times and all my flips held.”  To read more on Patel’s victory, click here.

Everyone knows Spartan’s first Millionaire Manoj Pentakota aka ‘MRBLUE’. IOPC Day 7 ended with the final and the biggest guaranteed tournament Highroller INR 55 Lakhs GTD which had a buy-in of INR 27,500 attracting 333 players. This led to the creation of a huge prize pool of INR 83.25 Lakhs and the top 31 places grabbed a portion from the same and walked out with a min-cash of INR 73,260. Pentakota has been making deep runs this week, after already taking down Wednesday’s G.O.A. on PokerBaazi, the champion remained undefeated and sent away ‘Zenos’ in heads-up after his high card Ace couldn’t stand Pentakota’ pair of Queens.

“Heads-up was deep and really tough. Also, it was fun to play with one of the top regs,” said Pentakota when Gutshot asked about his overall experience. Check out the IOPC leaderboard ranking after Day 7: