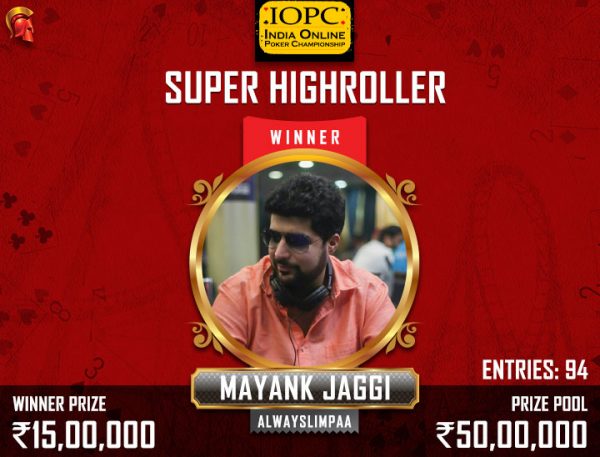 
Mayank ‘alwayslimpAA’ Jaggi emerged victorious in the India Online Poker Championship (IOPC) Super HighRoller tournament for INR 15,00,000. Along with the IOPC series, TheSpartanPoker.com is also running a cash game promotion called Play Max where ‘Lalchi14’ is on top with 6,798 points, followed by ‘NeerDosa’ with 4,485 points.

Coming back to IOPC, let’s take a quick look at yesterday’s events:

The day began with 462 entries in this tournament where the event saw ‘samwise’ emerging as winner, claiming the title for INR 66,250. In the last round of the tournament, ‘samwise’ defeated ‘therealslowroller’, who won second place. The second-place finisher ‘therealslowroller’ took home INR 41,250 for the finish.

The third event of the day saw a participation of 518 entries where the winner was none other than Sriharsha ‘indiandurrr’ Doddapaneni, the first Destiny SnG Finale winner, who already claimed a title in the ongoing series and this win is the second title. ‘indiandurrr’ was rewarded with a prize of INR 101,500 for the first-place finish. ‘indiandurrr’ outlasted ‘rachubaba’ in the heads-up battle who collected INR 55,125 for the second-place finish.

The weekly featured tournament ‘The Flash’ guaranteed INR 15,00,000, with INR 5,00,000 going to the champion ‘slickbob’. The first-place finisher received INR 5,30,400 for the title. ‘slickbob’ defeated Rahul ‘LuckyLuciano’ Lal in the heads-up battle at second place. The runner-up Lal took INR 326,400 for the impressive finish.

The biggest buy-in tournament of the series Super HighRoller with over INR 50 Lakhs guaranteed in prize pool saw Delhi-based poker player Mayank ‘alwayslimpAA’ Jaggi as winner claiming the title for INR 15,00,000. Jaggi had won the ticket of Super HighRoller from the Super Satty to HighRoller events where he received tickets to all the HighRoller tournaments of IOPC.

After the December 2016 Millionaire title for INR 12 Lakhs (~), this is Jaggi’s second major title on TheSpartanPoker. He outlasted 93 participants and IOPC #33 title winner Anant ‘Pro’ Purohit in the heads-up battle.

Speaking with Mayank Jaggi, he said, “It feels great to win after a really long time and that too after shipping a satty for this event. It was a great final table and special thanks to TheSpartanPoker for the tournament structure because the average stack always stayed above 35BB which made it quite comfortable. I would like to thank many players from the rail, Kulvinder Jolly, Mani ‘king.of.Queens’ Singh, Gaurav ‘NuttieGuttie’ Jain, Faiz Alam, Eka Vedantham. I must say Anant ‘Pro’ Purohit and Rishab Jain played a good game in the tournament. “

The last tournament of the day drew 429 entries creating a prize pool of INR 858,000. The prize pool was collected by top 40 places with a min-cash of INR 5,148. The champion of the tournament ‘randomwalk’ defeated ‘Husky’ in the last round of the tournament. The winner walked away with INR 227,370 while the second-place finisher ‘Husky’ collected INR 141,570 for the second-place finish.

After Day 7 of the ongoing IOPC series, ‘GoMuckYourself’ has maintained the top place of the INR 27 Lakhs leaderboard where the top place finisher will be rewarded with a Jeep Compass and the other top 9 places will get cash in chips prize.

Take a quick look at the updated leaderboard: 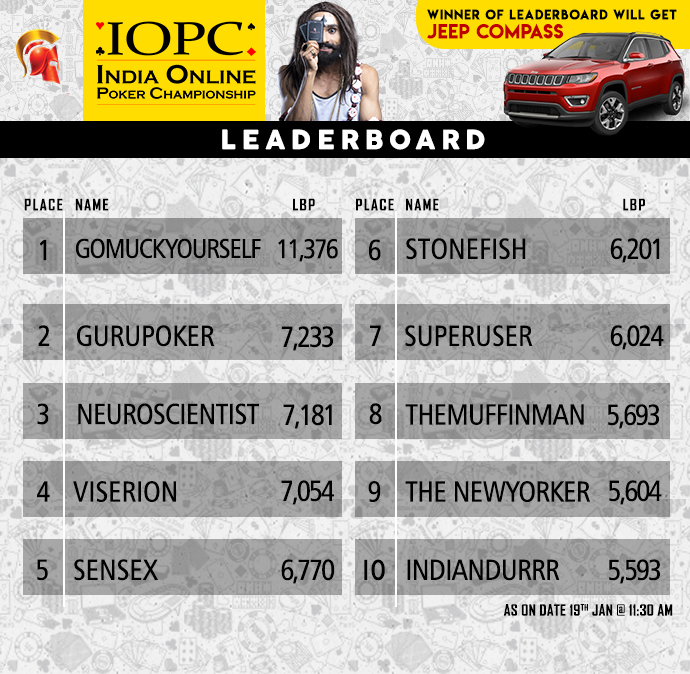