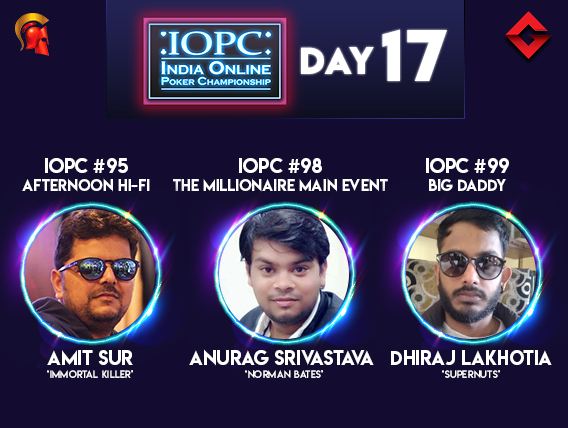 
Yesterday was the final day of the India Online Poker Championship (IOPC) on Spartan Poker. Apart from the prestigious IOPC Millionaire Main Event which had Anurag Srivastava as the ultimate champion to win a hefty 7-figure cash prize, there was a series of other tournaments that also crowned their worthy winners, including Sunday SuperStack, Big Daddy and so on. Here is a complete summary of IOPC Day 17…

The first tournament of the last day attracted 622 players after each one paid INR 550 buy-in amount. Out of this, only the top 39 players earned a min-cash of INR 2,145, a share from the final prize pool of INR 3.11 Lakhs. Hunting his first IOPC title was ‘Chinmoku’ who railed out Bhanu Prakash aka ‘spectre’ in heads-up with his pair of Aces and Queen kicker to seize the winner’s prize money.

Two Millionaire Main Event flights were scheduled on Sunday the first one hosted at 1 pm pulled out 388 players after each one chipped in INR 11,000. The recent Millionaire Legends winner Dhruvin Kothari aka ‘thepokerplayer’ who has been making few deep runs, amassed the largest stack of 2.28 million. Kothari was followed by online reg Mithun Mahesh aka ‘Intuitionnn’ with 2.17 million chips on Day 1G.

Another well-known circuit grinder ‘Immortal Killer’ and the 2020 IOPC leaderboard topper, outlasted a field of 417 runners in Afternoon Hi-Fi. INR 1,100 was the buy-in which saw the creation of the final prize pool of INR 4.17 Lakhs and the top 31 places benefited from the same. ‘Immortal Killer’ topped the list, adding his second IOPC title after the players settled for a 3-way deal which saw Anuj Laddhad aka ‘Anuj16101’ in the second position and ‘SantroScrooge’ in the third place.

At 6 pm, Day 1H, the last scheduled flight enrolled 623 players in total in The Millionaire Main Event. After hours of grinding, it was Suraj Rathi aka ‘OmgRATHIIII’ accumulating the largest stack of 2.30 million followed by Gaurav Sood aka ‘mozzie17’, second in the chip lead bagging 2.15 million progressing with the final survivors to Day 2.

Sunday feature on Spartan Poker was Sunday SuperStack, another attraction that pulled out a massive field of 881 entries after paying INR 5,500 buy-in. The number was enough to smash the displayed guarantee to create the final prize pool of INR 44.05 Lakhs, which was earned by the top 87 players. Topping the list was ‘GGGenius’ after the players settled for a 3-way deal and that’s when Pranay Chawla aka ‘MajhiSatakali’ settled in the second position and ‘Tiger10’ in third place.

The tournament saw a total of 3,490 participants taking their seats to battle it out. The major attraction of the IOPC series, the Millionaire Main Event promised INR 3 Crore GTD comprising of a total of 8 flights and eventually, 430 players earned a min-cash from the massive prize pool of INR 3.49 Crore! After 6+ hours of intense grinding on Day 2, the dust had settled and we had a winner in Anurag Srivastava aka ‘Norman Bates’, making history to have won the biggest online poker tournament in the country earning a massive amount of INR 59+ Lakh! To read more on Srivastava’s win, click here.

In Level 46, Srivastava (A♦ 9♠) had accumulated a bigger stack of 36 million up against ‘PokerBadger’ (6♠ K♠) with 5.5 million chips. The latter put his entire stack in the middle and got a call from the former. Eventually, the board opened 8♦ 3♠ K♦ 9♥ 9♣ and that’s when Srivastava tossed his trip Nines over his opponent’s two pairs of Kings and Nines and was crowned the IOPC Main Event winner!

The 17-day grind came to an end with the 99th event being Big Daddy. INR 1,650 was the buy-in to enter the tournament which fetched 703 players, hunting to grab the final title. The number was enough to slightly surpass the guaranteed amount which became INR 10.54 Lakhs in the prize pool. The top 63 places received a share from the same but the one to take away the biggest chunk was Dhiraj Lakhotia aka ‘supernuts’ after the players settled for a heads-up deal which saw ‘crazy_coyote’ in the runner-up position.