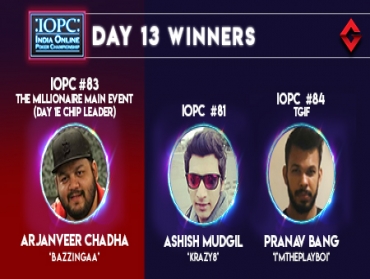 
We are just two days away to mark an end to the biggest poker series in the country, the India Poker Championship INR 16+ Crore GTD. Fifteen successful days so far, each tournament gained immense limelight with a surge of players. There were a number of tournaments lined up yesterday including The Millionaire Main Event, TGIF and The Elite and here is a complete summary on IOPC Day 15…

The first tournament of the day began with the lowest buy-in in the entire IOPC series, INR 330, attracting a total of 884 runners hunting to grab the first title of the day. This eventually led to the creation of a bigger prize pool of INR 2.65 Lakhs and the top 55 places profited from a portion of the same. It was Ashish Mudgil aka ‘Krazy8’ who eliminated ‘Ashokdhaker123’ in heads-up with his pair of Kings against his opponent’s single pair of Six to grab the valuable title.

444 players enrolled themselves after each one chipped a bigger buy-in of INR 1,100 which drove the guarantee to become INR 4.44 Lakhs in the prize pool. The top 31 places earned themselves a min-cash of INR 3,907 but the one to gain the lion’s portion of the same was ‘illuminati.AM’, capturing the first-place prize money after defeating ‘lol this guy’ in heads-up with his two pairs of Kings and Tens over the latter’s Kings and Eights.

The major attraction of the entire IOPC series wrapped up Day 1E yesterday night after 4+ hours of intense grinding. A well-known figure in the online circuit Arjanveer Chadha aka ‘bazzingaa’ possessed the largest stack of 179,230 leading with 53 survivors to Day 2. The chip leader is followed by Manoj Pentakota aka ‘MRBLUE’ who was also second in chip lead on Day 1D. To read more, click here.

Friday night on Spartan Poker is reserved for two featured tournaments and one of them is TGIF INR 12 Lakhs GTD. Recording a massive field of 902 players after each one paid INR 1,650 buy-in which saw the final prize pool of INR 14.94 Lakhs to be shared among the top 87 places along with a min-cash of INR 4,631. It was Pranav Bang aka ‘I’mThePlayboi’ to top the list after the players struck a heads-up deal which eventually saw ‘TimeTraveler’ in the runner-up position.

A popular featured tournament on Spartan Poker, The Elite INR 30 Lakhs GTD logged in 410 players for a buy-in of INR 11,000 each. This was enough to crush the advertised guarantee and create a bigger prize pool of INR 41 Lakhs, the top 39 finishers earned a min-cash of INR 28,290. Capturing the IOPC title was ‘Yennefer’ who seized the day after eliminating ‘lionroar29’ in heads-up.

By the time the tournament reached level 43, Yennefer with Q♦ Q♥ accumulated a huge stack of 4.39 million up against lionroar29 with K♦ 7♠ and 525k chips. Eventually, the latter went all-in and got a call from the former. The board opened J♦ T♣ 7♦ Q♠ 8♠ and that’s when ‘Yennefer’ knocked out ‘lionroar29’ with his trip Queens over his opponent’s pair of Seven and triumphed the tournament.

IOPC Day 15 ended with Daily Hi-Fi promising INR 8 Lakhs GTD which attracted a total of 433 players for a buy-in of INR 2,200. This field was enough to cross the guarantee and generate INR 8.66 Lakhs in prize pool, well-distributed among the top 36 places who took home INR 5,629 as min-cash. Grabbing his second IOPC title was ‘Prak27’ after already triumphing Event #28. In level 43 of the tournament, the players decided to settle for a 3-way deal and with ‘Prak27’ carrying the largest stack was declared and the official winner.

‘Immortal Killer’ ahead on IOPC Leaderboard

After concluding fifteen successful days of the ongoing series that promises INR 16+ Crore GTD and an anonymous player ‘Immortal Killer’ has gained the lead on the IOPC Leaderboard with an incredible 10,202 points. With 80 tournaments played so far, the topper won IOPC Day 3 Event #15 against Sachin Raj aka ‘Hell’ in heads-up. He was also the runner-up of Event #48 on Day 9 playing against ‘FunkeyFox’.

Second in lead is a prominent name in the online felts and an upcoming player in the live scene, Sriharsha D popularly known as ‘Fish2050’ accumulating 9,149 points won IOPC Day 2 Saturday feature Event #12 Mega Freeze and back-to-back titles on Day 6.

Well, the leaderboard winner will drive away MG Hector, there’s plenty of prize money instore for the players following next. The second-place finisher gets INR 3.5 Lakhs while the 10th place will be rewarded with INR 35,000. However, the table could turn as we are still 2 days away from marking an end to the entire series! Stay tuned to GutshotMagazine.com for similar updates!