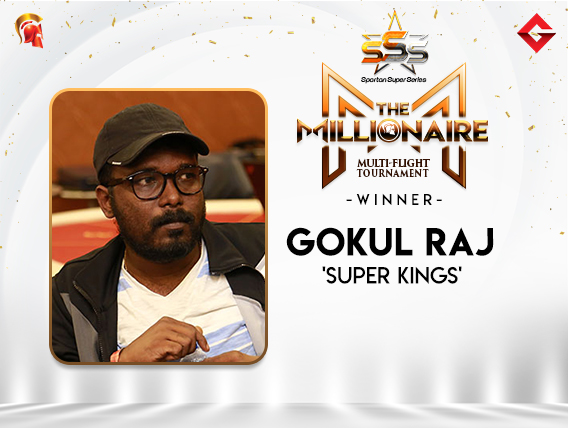 
Spartan Poker announced an action-packed month of November which gave not one or two but several poker players the hope of becoming the next Millionaire by playing online poker. Earlier, the tournament used to be played once a month but this month, three different Millionaire were announced, the first being Millionaire Legends which was won by Anish Patra!

A couple of nights back, Gokul Raj emerged victorious in the Spartan Super Series (SSS) edition of Millionaire, which was another multi-flight tournament, this time with a buy-in of INR 11,000. A total field of 1,588 entries registered to the tournament across the starting flights and 254 stacks were taken forward to Day 2, which was played on Sunday, 17th November.

Raj managed to slay the field and he bagged another major title on Spartan Poker, adding to the massive trophy cabinet he has for Spartan tournaments. Not too long ago, she shipped the Destiny 10.0 Finale SnG as well, while also winning 5For5 earlier this year and the IOPC Super Highroller prior to that.

Raj has won almost every major tournament offering there is to win on Spartan, and this Millionaire victory completed the list for him. We caught up with the player to ask him a few questions about his poker life as well as winning what is one of the biggest tournaments in online poker in India. Keep reading…

Congratulations Gokul. You’ve had a few major victories online. Would you say that this is one of your best wins till date?

“Thanks. I won the SHR in the Jan 2019 edition of the India Online Poker Championship (IOPC) on Spartan Poker, so that will also be my most special victory. However, this Millionaire victory can be the second best!”

How do poker players look at ‘Millionaire’? What do you think of Spartan’s decision to have three Millionaires in November?

“Of course, ‘The Millionaire’ is a prestigious and favourite title among all poker players in India, both regs as well as pros. I’m very happy to have this title in my bag. Spartan Poker is certainly doing its bit to make a huge change and a big noise in the Indian poker industry. With back to back to back Millionaires in this month of November, they are proving it to be the best.”

At which point in the tournament did you believe you could go on to win?

“To be honest, I had a very, very tough table draw when we were down to the last 2 tables. Raghav Bansal, Vaibhav Sharma, Rajat Sharma and Sahil Mahboobani were all on my table. When Vaibhav had the chip lead, I won a massive flip against him with my 99 against his AK. That’s the moment I knew I had a massive shot at winning it. Luckily, I ran good to ship it.”

Any plans for this prize money?

“Nothing special really. I might go for the WPT Cambodia series which is taking place currently. I’m happy that I’m playing well and building my bankroll. Study and embrace the grind every day!”