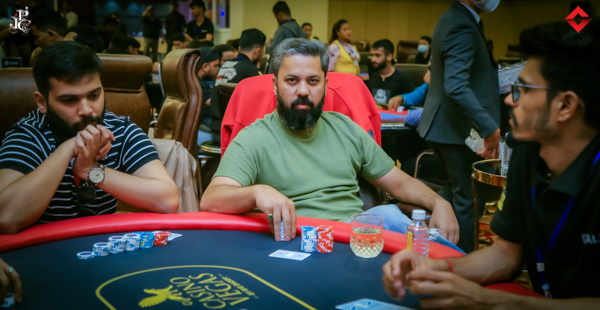 India Online Poker Championship (IOPC) July 2021 Blaze of Glory winner, Harshad Barve is making some amazing moves. On Table 5 at Level 4 (blinds 200/300, and ante 300), preflop action saw Barve betting 800 which was called by Shekhar Agarwal, Kunal Patni and Ankit Jajodia. On the flop (9c 4s 2d), Barve with As Ks opted for a c-bet of 1,100 which got called by Agarwal (9s 9h) who hit three of a kind while the other players chose to fold. Turn (3s) saw Barve going all-in with 7,300 chips with a flush and straight draw (12 outs) and getting called by Agarwal again. The river of 5h gave Barve a straight beating Agarwal’s trips whose nuts on the flop were destroyed by a runner runner outcome.