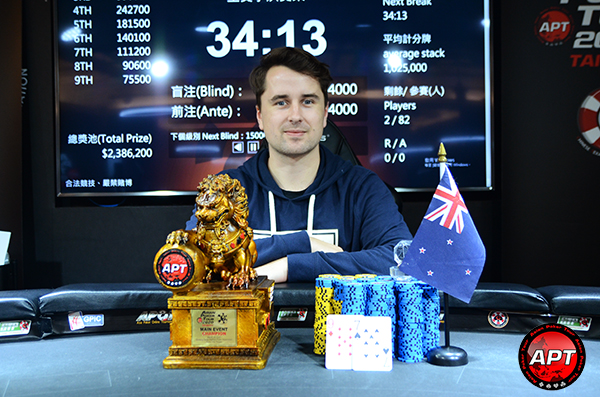 
The Asian Poker Tour (APT) Taiwan 2020 is halfway though the mark as the tour resumed on 4 March in Taipei City at the Chinese Hold’em Poker Association (CPT) spreading across 24 events in total to be played till 15 March. While the world was busy fighting the coronavirus epidemic, it was New Zealand’s Hamish Crawshaw to take down the APT Taiwan Main Event!

The featured tournament drew 82 runners after each paid TWD 33,000 which eventually collected TWD 2.38 million in prize pool. Crawshaw entered the day with a chip lead while this was his first-ever APT Main Event final table appearance as well as his first APT title. Day 2 of the Main Event saw its first casualty Chi Jen Chu in the 10th place.

The nine-handed play began, and it was Carter Ching Wei to fall in the 9th place after his Ace-Jack failed to dominate Vincent Huang’s Ace-Queen. Ten minutes later, Yi Wei Peng followed the same door after which Chin Wei Khong crushed Huang. Next in line was Liu Chen Yi who ran into Crawshaw’s pocket Aces to take the 6th place. Crawshaw eliminated four out of six Taiwanese finalists.

Soon the three-handed play began with Crawshaw still in command. Chi Jen Chu lost a sizeable pot to Ho Cung Yi and finally went out to Crawshaw when the board opened 2s 4s 3h Qd 4c and Crawshaw triple-barreled pushing on the river. Chu called with As 4h. The latter’s straight eliminated Chu in the third place.

Eventually, heads-up got underway and it took more than 4 hours for the champion to grab the title. Leadership kept switching back and forth and in the final hand of the tournament, the board opened 7h Qd 4h 9h, Ho with Qh Js and Crawshaw with 9d 7s. With 9c on the river, Crawshaw shipped the entire tournament, lifting his first-ever APT title along with TWD 725,200 in prize money (~INR 17.83 Lakhs).

Keep reading GutshotMagazine.com for more updates on APT Taiwan and other poker tournaments around the world.