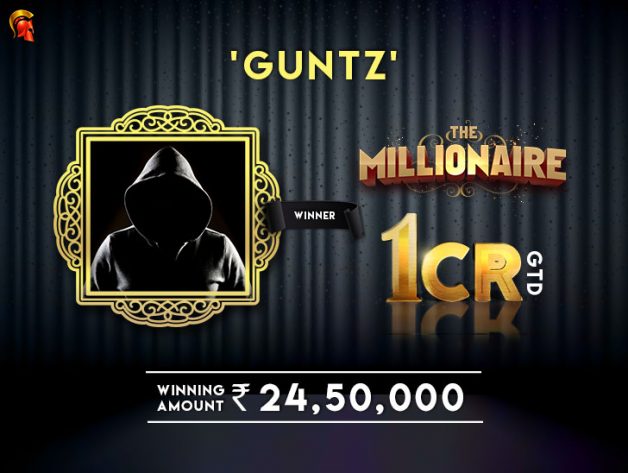 
The biggest night of every month, when all poker players across the country come under one roof which is that of The Spartan Poker happened last night. The Millionaire tournament, Spartan’s signature monthly tournament, features a whopping guarantee of INR 1 crore in prizepool. It’s been more than 17 months for TheSpartanPoker to host the Millionaire tournament which has rapidly risen from its original 10 Lakhs GTD for 1st place to the now ongoing 1 CR GTD in overall prizepool at the same buy-in of INR 5,500.

The tournament began at 4:30 pm sharp and ran for about 12 hours at the end of which the champion was crowned in ‘guntz’ who collected INR 24,50,000 for outlasting 1821 entries in the field. ‘guntz’ defeated ‘AbbDangalHoga’ in the heads-up battle. ‘AbbDangalHoga’ scored a payday of INR 14,70,000 for his runner-up finish. The last hand of the tournament came in the Level #63 with the blinds running 250,000-500,000-65,000. ‘guntz’ was holding Jh 5h against ‘AbbDangalHoga’s’ Ks 2d. After posting blinds pre-flop, these two players pushed all their chips into the middle risking their tournament life for a chance at poker glory. The board ran 4s 5s As 2c 8d giving a pair of Fives to ‘guntz’ and also the prestigious Millionaire title.

‘guntz’ is not new to TheSpartanPoker recently making an impressive finish in India Online Poker Championship’s (IOPC) Event #30 Destiny tournament. A 3rd place finish for INR 282,000 in the Destiny, a first place finish in TheSpartanPoker’s Last Chance (100K GTD) tournament for INR 27,750 as well as a 4th place finish in Spartan’s Big Freeze (250K GTD) for INR 22,500. Apart from these finishes and cash, ‘guntz’ has had several deep runs making it to many final tables.