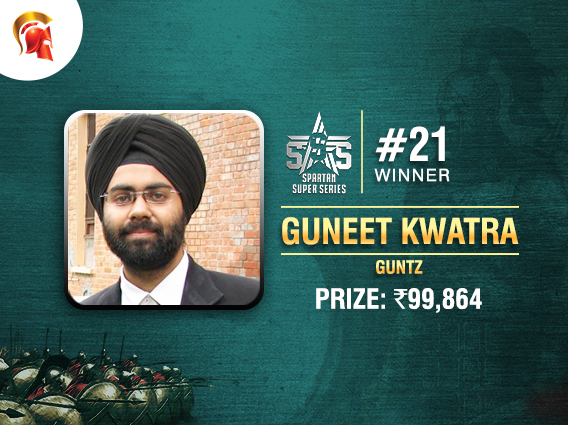 
With some heavy competition in The Flash and the Super High Roller as a part of the ongoing Spartan Super Series, most would’ve overlooked the final tournament of the day – SSS Event #21 INR 5 Lakh GTD. However, this INR 990 buy-in tournament also saw its guarantee being beaten, thanks to a massive field of 584 entries that created a new prize pool of INR 5,25,600.

The top 45 players were paid out a minimum cash prize of INR 2,890 and the lion’s share of this prize pool went to none other than Guneet Kwatra, who plays on Spartan under the name ‘guntz’. He beat ‘DontAskMeWhy’ in heads-up and took home the top prize of INR 99,864, while his opponent walked away with INR 72,270 for finishing second.

Now Guneet Kwatra is not new to big online poker wins, having won a few titles in the past as well. Remember, he is also one of The Millionaire winners on Spartan having won that signature tournament for a whopping prize of INR 24.5 lakh in February this year. He also won a Sunday Super Stack title a couple of months back, for over INR 5 lakh.

This particular tournament ended in Level #52, with the blinds at 17,500/35,000 – 3,500, and Kwatra enjoying nearly a 5:1 chip lead over DontAskMeWhy. With Ad 6d, Kwatra went all-in pre-flop and his opponent made the call with Ac 5h, in what became the final hand of the tournament. Jc Jd Kc Qh 6s meant a pair of Jacks on the board, and Kwatra improved with Jacks and Sixes, giving him the pot and the title.

Gutshot caught up with Kwatra after this SSS title win. He said, “Regarding key hands, I entered the final table 5/8, the structure was fairly deep though, with the average stack around 30-35 BBs even when it was 3-handed. I started heads-up with a 6:1 chip lead and managed to close it off.”