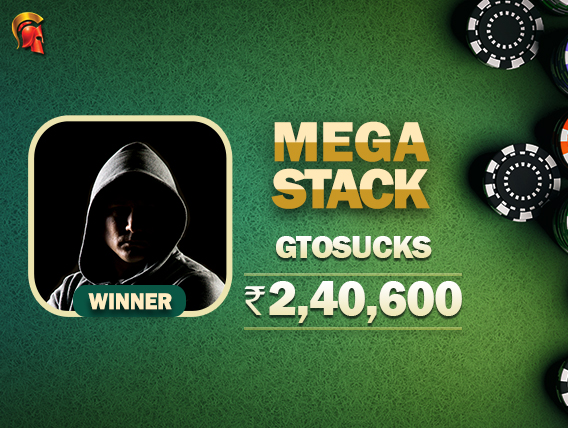 ‘GTOsucks’ completes a hat-trick on Spartan in a week!


The Spartan Poker is well-known for conducting high-stakes feature tournaments throughout the week, hosting one each day. One such event is the Mega Stack tourney, one of the popular feature tournaments on Spartan which happens every Tuesday night, having INR 3,300 buy-in and INR 12 Lakhs in guaranteed prize pool.

This week’s Mega Stack began at the usual 7:30 pm and saw a total of 398 entries with top 39 players being paid out, minimum cash prize being INR 8,280. The anonymous player who goes by the name of ‘GTOsucks’ was the crowned champion of this event, taking home a hefty sum of INR 2,40,600 as first place money. The guy is on the crest of a wave with this win, hitting the hat-trick on Spartan in a span of 6 days, shipping Destiny 7.0 INR 20 Lakhs GTD just last Wednesday, the 14th, followed by another spectacular first place finish at the Elite INR 18 Lakhs GTD two days later, on Friday. He took home upwards of INR 11.7 Lakhs as total prize money in this period. His play in the past few days is the stuff of dreams for online grinders looking to make it big in the poker world.

GTOsucks defeated ‘Pavs’ in the heads-up of the Mega Stack at Level 53. The SB and BB was 20K and 40K respectively and ante being 4K. With around 8:1 chip lead for GTOsucks, his opponent had no choice but to go all-in pre-flop with 5d Th. The eventual champion called immediately with his A6s. The flop came to As Jc 5h rainbow, and GTOsucks took the lead, making an Ace-pair and leading over his opponent’s 5-pair. The turn came to Ks and the river Kc, enabling GTOsucks to ship the tournament with his two pair of Aces and Kings. Pavs took home the runner-up cash prize of INR 1,59,960.

GTOsucks has also bagged the chance to win the INR 10 Lakhs package trip to a prestigious poker festival in Europe by wining the Destiny 7.0 on The Spartan Poker. This player is someone to watch out for in upcoming tournaments. With the Spartan Super Series having begun just yesterday, who knows he might ship one of the big events in this series too after witnessing such an amazing warm-up routine.