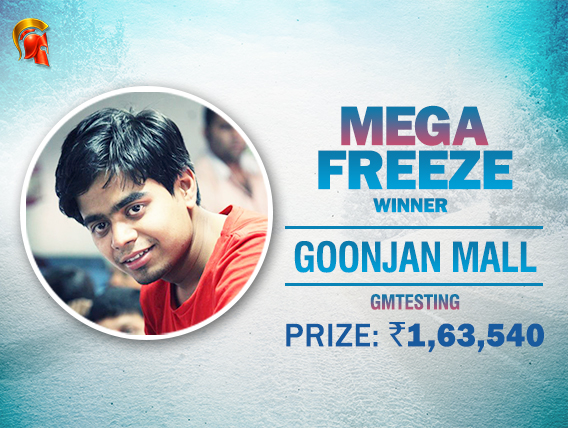 
The Spartan Poker is one of India’s top poker companies and they host daily featured tournaments every evening, with high guarantees and big prizes for those who make deep runs. Of late, there’s one player called Goonjan Mall aka ‘gmtesting’ who seems to have set out on a mission to win all of these Spartan featured tournaments.

Mall had a brilliant month of August, having shipped The Elite on 11th August and then also the Sunday SuperStack a couple of days later. Turns out, he’s been doing well on all major websites, also having topped the Ace Race II Leaderboard on Adda52 in the month of August.

He decided to bring this good run of form into the month of September as well, now winning the Mega Freeze tournament on Spartan, and adding another major featured tournament to his list of poker achievements. The Mega Freeze INR 5 Lakh GTD is a freezeout tournament with an entry fee of INR 5,500 and this tournament takes place every Monday on Spartan. Yesterday too, it kicked off at 7:30pm, and wrapped up 4 hours and 42 minutes later, with no player allowed re-entries in this format.

130 entries registered to the tournament, which broke the guarantee and created a new prize pool of INR 6.5 lakh. Goonjan Mall outlasted all these entries and walked away with the biggest prize of INR 1,63,540, in a tournament where the top 17 players were paid out a min-cash of INR 10,205.

Gutshot caught up with this player after he won yet another poker title online. He was surely being humble when he said, “I got super lucky. Won flips.” We also asked him about any key moments in the tournament, to which he said, “I flopped quad tens on the FT and got paid off by AK when my opponent turned an Ace. Then, there was no looking back.”

Keep reading GutshotMagazine.com for similar updates on the top poker tournaments in India and around the world.