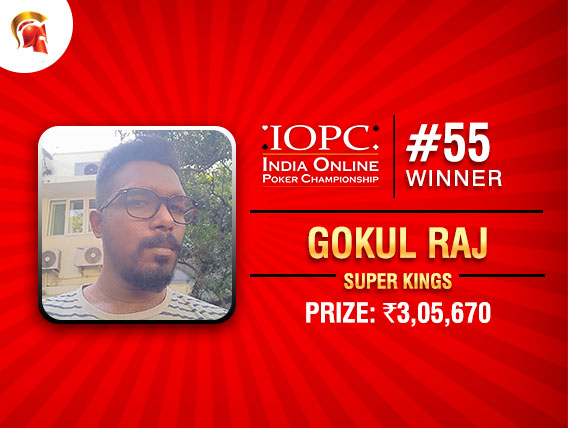 
There was a long line of high-value tournaments on the final day of the India Online Poker Championship (IOPC) on The Spartan Poker yesterday. After the likes of the Big Daddy tournament, the weekly Sunday SuperStack and the prestigious IOPC Main Event, the series was concluded with the final tournament – IOPC Event #55 INR 12 Lac GTD (4400 RE).

This tournament began at 9:30 pm IST last night and the guarantee was beaten once again, like it has been continuously through this edition of the IOPC. 345 entries registered to this late-night tournament and this good participation generated a new prize pool of INR 13,80,000.

The top 27 players finished in the money for a minimum cash prize of INR 13,800 and at the end of it all, it was poker player Gokul Raj who outlasted the field to ship the tournament and take home the first-place prize of INR 3,05,670. He beat ‘RippingAA’, who also shipped IOPC DareDevil tournament a couple of days back.

Playing under the username ‘Super Kings’, Raj won his first title of the IOPC series, but he was a consistent finisher in many other tournaments, which earned him a well-deserved spot on the IOPC Leaderboard. He ultimately finished at #9 on the leaderboard, for a prize of INR 50,000. RippingAA took away the runners-up prize of INR 2,06,310.

Raj had a 4:1 chip lead going into the final hand of the tournament in Level #45, where the blinds were 24,000/48,000 – 6,000. RippingAA had queens and threes, while Raj won the pot with three of a kind threes. When Gutshot contacted Raj about this win, he said, “It feels good to win the final event of the series and I’m happy to finish in the top 10 of the IOPC Leaderboard.”

Yes, the India Online Poker Championship is now over. However, you can keep reading GutshotMagazine.com for similar updates on poker tournaments from around the world.