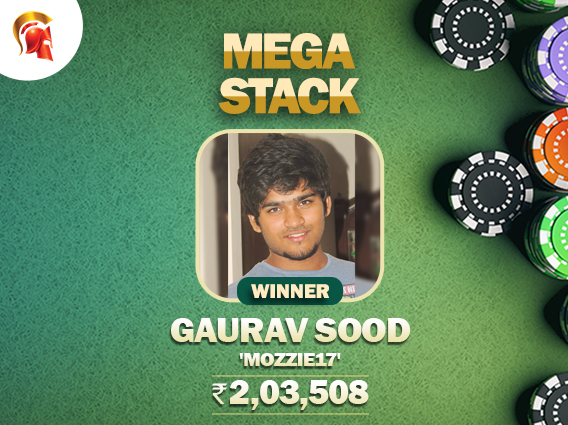 
Tuesdays on The Spartan Poker are famous for the Mega Stack tournament, where the top Indian pros take part in an INR 12 lakh GTD tournament. This is one of Spartan’s featured tournaments and your performance here counts towards the monthly Hot Tournament Leaderboard as well.

Like every Tuesday, the Mega Stack tournament guarantee was passed once again, with the INR 3,300 buy-in tournament attracting a total of 406 entries by the end of the registration period. It’s never easy to top a tournament field on Spartan, but Gaurav Sood did it last night, beating the field and taking down the title.

He was handsomely rewarded for this effort, taking home INR 2,03,508 for first place, playing under the name ‘mozzie17’. The player was up against ‘Drunkenf1st’ in heads-up, where the two players were nearly identical in chip stacks, with Drunkenf1st slightly ahead.

It was Level #56 of the tournament where the two players decided to strike a deal in heads-up and end the tournament for a nearly identical prize as well. In the final hand, Sood and Drunkenf1st checked till the river and the former revealed a pair of Queens, giving him a pot of 121,000 chips and putting him slightly ahead.

The two then decided to strike the deal, where Sood was given the title but Drunkenf1st took away a prize money slightly less than the winner – INR 2,03,059. Gutshot caught up with Sood after this victory. The 23-year old is currently studying dentistry and he told us that he picked up the sport of poker from his cousin back in 2014. He said, “At first, you don’t come to know the nuances of this beautiful game, but then when I got hooked into those videos on YouTube, I started seeing all the different facets.”

He further told us about his growth as a poker player, saying, “Back in ’14, we started penny stakes (INR 20 buy-in) to start with and gradually increased stakes. Almost all my friends played, some quit, some were compulsive gamblers that couldn’t, but everyone has a smirk on their face when asked about this 5-letter sport called poker. I basically started taking MTT’s seriously after getting surprisingly selected in PSL by Abhishek Goindi for the Punjab Bluffers, to whom I’m the most grateful for what I’m able to achieve till date.”

Talking about yesterday’s Mega Stack tournament, he said, “I started off the event on a swingy note but then had pretty bad second hour or so. I got two double ups in a quick succession and had a healthy above average stack. In the pre-bubble stages I won a huge pot with AA >> AQ which bolstered me to the top 5 stacks. Post bubble, I chipped down a bit and with the turbo-ish structure, you can really lose track. Got them back with a Q-high call on turn and river blind vs blind against Eka and I was good. That really helped my confidence. Slipped down to 8 of 12 after had to fold JJ and AQo in tricky situations and I turned out to be right both the times. Then, the major hand was UTG opens I flat KQs on button, flop KQ5, he bet, I raise he goes all and I snap. He had K5o. Chip leading from there to final 3, the other two were far more accomplished players than I am, Ashish Munot and Chiraag Patel. As the hands played out, I busted Ashish in a standard spot, where the hands played themselves. It’s unfair to say that I ‘shipped’ it as I made a heads-up deal with Chiraag, knowing the competent professional he is, I might as well have been crushed.”

The player was grateful to those from whom he has learnt along his journey so far, saying, “I want to really thank Abhishek Goindi, Paawan Bansal and Aditya Sushant for always being there for my hand histories and guiding me forward. That is the most pivotal part of me improving my game. I hope I become a sicko myself now that I have surrounded myself with them!”

The player also won the 200k PLO event on Spartan and he thanked the website as well, for giving him a platform to prove himself. He recently also won a satellite to the BLT 3 Main Event Day 1A on Baadshah Gaming: 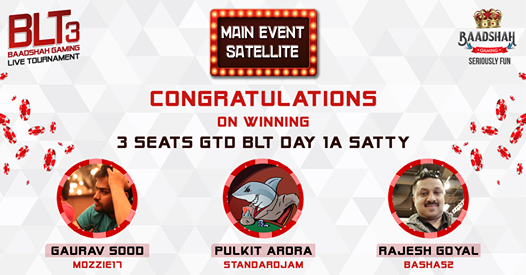