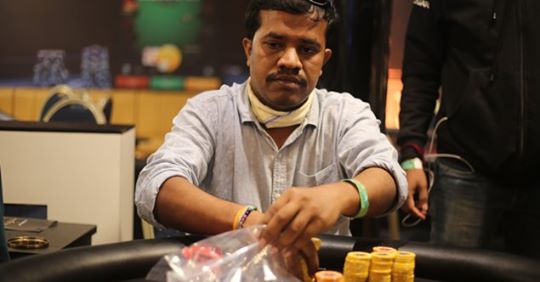 
The January 2020 edition of Baazi Poker Tour (BPT) is cramped with poker fanatics of the country. The casino floors are adding numerous players each day and who would have expected such a start to the new year! The PokerBaazi LIVE poker room in Casino Pride 2 is hosting the 7-day long BPT series which kick started with our first winner Ashish Ahuja who took down the 10k Kick Off.

The second tournament BPT INR 15k Big Bounty came roaring and smashed the assured amount. The two-day event lured 193 players who registered to pay a fixed buy-in of INR 15,000, collecting a prize pool of INR 17.56 Lakhs. Play was about to continue till Level 20 but was halted three minutes into Level 19 forming the nine-handed final table.

Claiming the day and amassing the largest stack of 535,000 chips was Gangadhar Raaj who was also the chip leader of the previous edition’s BPT Bounty Event. Closely following the chip leader were J Raju accumulating 481,000 chips and Deepanshi Tomar bagging 406,000 chips.

Raaj was first seen in the live circuit in the previous edition of BPT where he was recorded to have finished 3rd in the Big Bounty for his career-best $4,471 followed by a 9th place finish in Kick Off and 16th in the 2019 BPT Main Event. Other notable players advancing to Day 2 include Kshitij Kucheria bagging 286,000 chips, while both Chirag Sodha and Nishant Sharma held 218,000 and 232,000 chips respectively, both also featuring on the 10k Event Final Table.

It was Myron Pereira who became the bubble boy, busted by Sodha who railed him out in 25th place and the top 24 places were assured payouts. Jyoti Ranjan Nayak was the first to end in the money securing INR 19,500, Anuj Yadav in the 18th place for INR 22,000 followed by Kunal Patni in the 12th position for INR 30,400 were some of the known faces to cash.

Day 2 will resume today, 10 January at 2 pm local time and the final 9 players will return to their seats aiming for the top prize of INR 4.30 Lakhs! You can stay tuned to GutshotMagazine.com for all updates from the ongoing Baazi Poker Tour (BPT) in Goa.