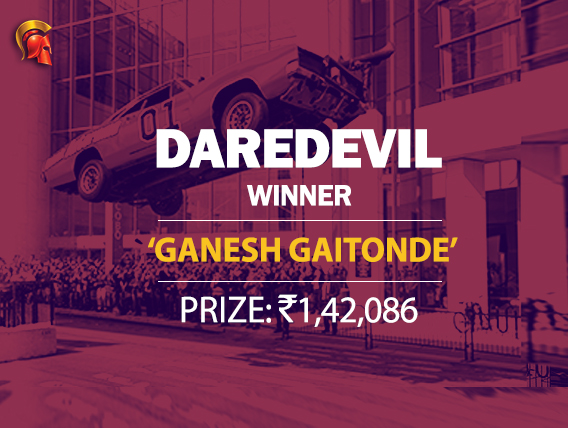 
One of the most popular weekend tournaments at The Spartan Poker is the DareDevil. An interesting concept has been incorporated into this featured tournament of Saturday evening where players who get knocked, before the end of late registration, will be able to buy-in for 50% of the original buy-in. Not surprising that every week’s DareDevil goes past its 5 Lakhs guarantee with attractive prizepools on offer for the participants. Last night the biggest share of the DareDevil went to ‘Ganesh Gaitonde’ who claimed the win in this tournament.

Kicking off at 7:30 pm on Saturday evening, the DareDevil saw 77 players come together. Given the incentivised re-entry option mentioned earlier, the prizepool swelled up to INR 6,04,000 by the end of registrations. Nine players got paid out in this tournament with INR 19,630 being the minimum assured payday going their way. Nitin Arora a.k.a ‘Demogorgon’ who recently won a Destiny event at Spartan finished deep in this event but just missed out on the final table finishing in 9th place for a min-cash. We also had other recent winners like ‘omgrachelgreen’, a multi-title winner at the recent Spartan Super Series (SSS) and another SSS winner in ‘bubble’ also cashing on the final table in 7th (INR 33,220) and 6th (INR 40,770) respectively.

Fourth place finisher was ‘Manashnayak’ and he was the last elimination of this tournament as the remaining three survivors decided to make a deal on ICM basis. Manashnayak was the short stack and with 2s 2h moved all-in preflop. ‘Psycorp1’ and ‘spectre’ got out of the way but Ganesh Gaitonde (Ks Kh) made a snap call with his cowboys. While there was no help for his opponent’s Deuces, Ganesh Gaitonde’s Kings improved to a full house by the river on a board of Jh 5s 4d 5c Kc.

The remaining 3 players players played out a few hands before dealing it out. Tourney reg Bhanu Prakash a.k.a ‘spectre’ who just missed out on a Little Big Series title earlier in the day finished in 2nd runner-up for a score of INR 1,12,955. Psycorp1 was the first runner-up and got INR 1,20,948 and the biggest share went to the chipleader and winner Ganesh Gaitonde, a sum of INR 1,42,086.

That was it for the DareDevil’s round-up and remember to participate in this evening’s Sunday SuperStack where a portion of every buy-in will be donated to the Kerala Flood Relief activities. Play poker for a cause this evening at 7:30pm at The Spartan Poker.