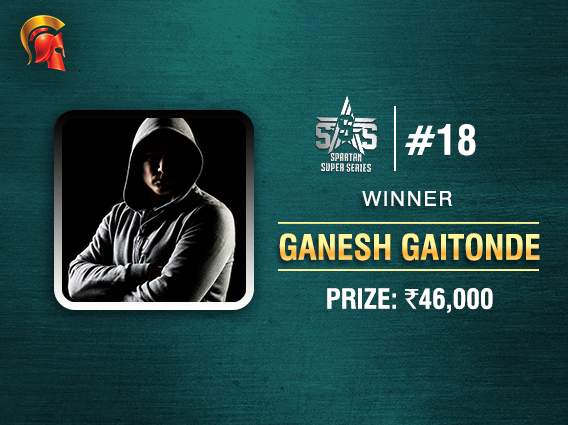 
The Spartan Poker seems to have found a big Sacred Games fan in one of their users called ‘Ganesh Gaitonde’. Clearly inspired by the Nawazuddin Siddiqui character from the hit Netflix web-series, this user is not just playing but also winning big amounts on Spartan in recent times.

It was just a little over a month ago when Ganesh Gaitonde won the Daredevil title on Spartan for around INR 1.42 lakh in prize money. Now, the player has gone on to get another big win on their platform, this time winning a tournament which was a part of the Spartan Super Series (SSS).

SSS Event #18 INR 200k GTD kicked off yesterday early evening, one of six scheduled events of SSS Day 4. With a buy-in of INR 1,100, players were allowed just a single re-entry and at the end of the registration period, a field of 168 entries was created with the top 24 places being paid out a minimum of INR 2,000 each.

‘Ganesh Gaitonde’ was the player who emerged victorious from this field, pouching INR 46,000 for first place, while also winning his first ever SSS title. The long grind of SSS Event #18 ended after he beat heads-up opponent ‘The Rock nd RoLLa’, with the latter taking away a sum of INR 30,900 for second place.

However, he would’ve disappointed to see Ganesh Gaitonde making the call with Ac Ts and a pair of Tens with a higher kicker. With 7s and 3c being the final two cards to open on the board, both players had Tens and Sevens, but Ganesh Gaitonde’s Ace kicker ensured he wins the pot and the SSS Event #18 title.