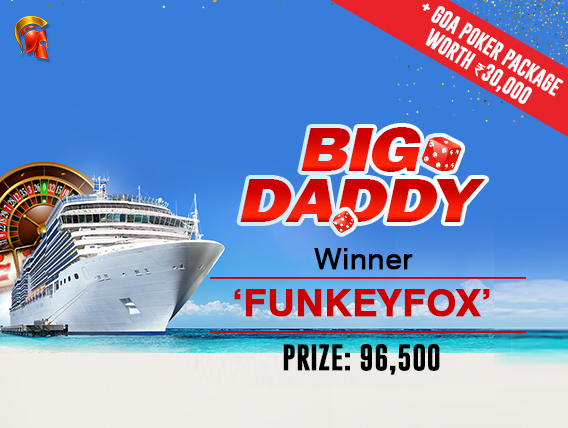 
As an online poker player in India, you would know that Sundays are the happiest days, as all the big online poker tournaments take place on Sundays, where companies expect the highest participation, thus leading to bigger prize pools and bigger pay-checks to take home.

One such tournament on The Spartan Poker is the Big Daddy tournament, which is an INR 5 lakh GTD tournament that takes place every Sunday at 4pm IST. The best part about this tournament is that the winner is awarded a package trip to play poker at the Big Daddy Casino in Goa, in addition to his/her tournament winnings.

Yesterday’s Big Daddy tournament went on for 5 hours and 20 minutes, with ‘FunkeyFox’ emerging as the winner from the field of 915 entries. He walked away with the top prize of INR 96,500 and will also be making a trip to Goa soon, for beating ‘ikilldonks’ in heads-up and shipping the tournament.

It all came to an end in Level #42, where the blinds were at 30,000/60,000 – 6,000 and both players had nearly similar chip stacks. FunkeyFox went all-in pre-flop with Td 7d and ikilldonks made the call with pocket Sixes. The latter was in the lead when the flop opened 3c 2d 3s. However, Th on the turn gave FunkeyFox two pairs – Tens and Threes, while the Ah on the river completed the win for the player.

Gutshot spoke to the player after this win. He shared his experience with us, while wishing to stay anonymous. He said, “I just changed gears whenever I needed to. I was chip leading for ample amount of time even before the ITM. Due to some unfortunate pots, I was shortest stack when there were 15 people left. Even then, I didn’t lose hope. I just waited for the right spots and eventually regained the chip lead and won the tournament.”

Keep reading GutshotMagazine.com for more updates on the biggest Indian poker tournaments, both live and online.