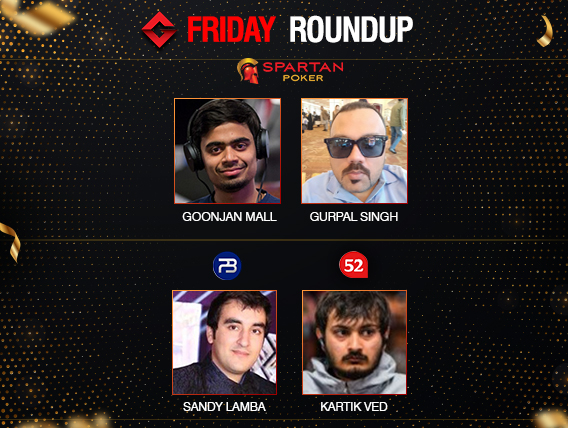 
The weekend is here and usually, we would be excited. But now, we’re all at home anyway with the coronavirus pandemic enforcing a lockdown in India. Some poker players in India have taken up a #21DayChallenge to win as many titles as possible during this time, with huge guarantees across websites. Here’s a complete look at the winners of the different Friday majors…

Elite is one of the biggest online featured tournaments on Spartan Poker and the guarantee was bumped up a bit further yesterday. Played in the popular 6-Max format, the tournament has a buy-in of INR 11,000 and the guarantee was absolutely smashed, with a new prize pool of INR 54+ Lakh being generated thanks to the 542 entries taking part.

From there, it was a fight among some of the best names in the industry and the person to end up victorious from them was Goonjan Mall aka ‘gmtesting’, someone who needs no introduction at all. He needs a win every now and then and yesterday, he bagged a big one as he outlasted Anant Purohit aka ‘Pro’ in heads-up, both taking home substantial amounts for their respective finishes. In the final hand, Pro’s straight draw and flush draw bricked on the river, letting Mall win with Queens and Sixes!

While Elite is one for the Highrollers, this one is for the players with a lower bankroll as the buy-in is only at INR 1,650. With all the players at home, this guarantee was also smashed to create a prize pool of 20.55 Lakh with 1,370 entries joining the party last night on Spartan Poker. From them, the top 119 players were paid out and the end came after the final two chopped the tournament, taking away equal prizes.

These two were Gurpal Singh aka ‘Boris brejcha’ and Manish Lakhotia aka ‘thekid’ who equalled out their stacks before calling a deal and the former winning the official title. It was 4:34am this morning when the tournament ended after an 8-and-a-half-hour grind, and these two would’ve gone to bed as happier people!

Here’s another regular Friday feature, this one on the PokerBaazi platform. With a buy-in of INR 4,400, the tournament is played in the PKO format and a total of 335 entries joined to take the prize pool past INR 10 Lakh. From them, the top 36 players received a piece of the pie. The winner however turned out to be Sandy Lamba aka ‘Ziigmund’ and he walked away with a handsome prize of INR 2.22 Lakh after he got past ‘neo1’ in the heads-up battle.

Another leading platform in India, Adda52 has also been upping the game in recent weeks and yesterday’s featured tournament was a successful one, beginning at 8pm last night and ending this morning at 4:32am. The field consisted of 548 entries that each paid the INR 7,500 buy-in and from them, only 55 took home a pay-check of INR 16,892 each.

One of the most known names in the industry, Kartik Ved aka ‘Pegasus1505’ ended as the winner, shipping a major and proving once again how this is a game of skill. He got past a number of top pros in the tournament including ‘AkkiDan007’ in heads-up, bagging the top prize of INR 9,00,912 for his efforts.

It was a great start to the weekend for all of these winners, and there’s more to come over the next couple of days. For more updates on the same, stay tuned to GutshotMagazine.com.