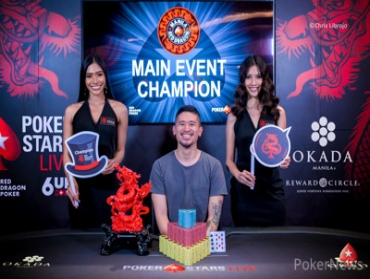 
The gorgeous Red Dragon trophy has been claimed! PokerStars LIVE Red Dragon Manila has crowned the ultimate Main Event champion whose name had been constantly echoing throughout the tournament. The Filipino and the first 2020 PSPC winner Platinum Pass winner Florencio Campomanes crushed the tournament to add the stunning title to his poker career.

Outlasting a strong field of 669 entries that smashed the advertised guarantee to create a healthy prize pool of PHP 64,244,070. After already taking down 2019 APPT Manila Main Event, Campomanes pounced through the field to grab the winner’s prize of PHP 13,815,070 (~INR 1.93 Crore), boosting his total live earnings of over $983k. In the on-going tournament, the champion also ranked 2nd in Super High Roller followed by 3rd place finish in the 2019 WPT Vietnam High Roller.

After few hours of eliminations, the tournament came down to the final two players. Now Campomanes was playing heads-up against Japan’s Tetsuro Tomita with a chip lead of 8:1 and yet decided to strike a deal. After two attempts to come into an agreement ultimately failed, Tomita doubled up twice holding Ace hole card but, in the end, he put his tournament life at risk, calling with Queen Eight. Little did he know, Campomanes’ pocket tens couldn’t be defeated which turned into a full house with the river card and that’s how the Filipino champ kick-started the new decade!

“Winning the PSPC Platinum Pass definitely gave me confidence, it was like a stamp saying, ‘you are a lucky boy,” Campomanes expressed. “That sort of lessens any pressure, not that there’s any pressure for me getting into the money or not, but like, it really puts me up there on the value of the pass, which is $30,000, that’s like me already reaching the final table in terms of value. I think that was really significant, that changed the complexion of the tournament for me.”

So stay tuned to GutshotMagazine.com for the latest updates on the Red Dragon Main Event and other tournaments around the world!