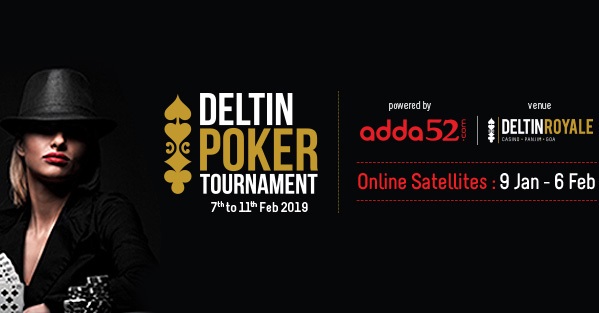 
Here we are again. It’s a new year and players from all over India are packing their bags once again, all set to fly down to Goa for another live poker tournament. With restrictions placed on live poker in India, these tournaments are few and far spaced, so none of the top players like to miss them. They are social poker gatherings, apart from competitions where players aim for the biggest cash prizes.

We’re talking about another edition of the Deltin Poker Tournament (DPT), the first edition of 2019, which has been scheduled to take place between 7-11 February 2019. Played on board the luxurious Deltin Royale in Goa, DPT has grown tremendously over the years and each time, we expect bigger and better fields participating.

This time should be no different, with a line of tournaments scheduled with buy-ins ranging between INR 15,000 – INR 65,000. Several top Indian pros and poker enthusiasts have already confirmed their participation in the series, while some will miss out for various reasons. Gutshot caught up with a handful of these players and asked them what their expectations were from the upcoming series.

“I look forward to the DPT this year as always, a great platform for the Indian poker community. It brings in a lot of raw talent that shine out to be the precious stones of the sport. A lot of fun and catching up to do with the community, and just a tip of advice – sometimes we all do not need a plan, but we just need balls to play our best game, so harden it up,” said Meherzad Munsaf, who is one of the veterans of the poker community and barely misses out on such live opportunities.

We also spoke to Tathagata Sengupta, someone who has been cashing big time in live and online poker of late. Some of his biggest online victories recently include November’s 2oK on Spartan and an EPT Sochi package on PokerStars last week. He said, “I’m really looking forward to score good in it. I last appeared in Deltin for WPT 2018 and had two FTs to go with other cashes. So, expecting a better performance this time.”

Adda52 Team Pro Kunal Patni also spoke to us about the tournament series, saying, “It’s the biggest live series in India and it’s always fun to be a part of it. I have generally done decently well in DPT and really looking forward to the next one, especially the Main Event and the HighRoller.”

Another player to watch out for in this series is the very experienced Shravan Chhabria. His renewed form at the online felts in recent times have led to plenty of titles across all major websites and we expect him to take this form to Goa as well. About the upcoming DPT series, he commented, “It should be a fun series where I’ll be looking to get some good scores as well.”

Another online grinder Anant Purohit has confirmed his participation in the series, looking to get his second DPT cash after finishing 35th in the Deep Dive tournament in July last year. “DPT is one of the best and biggest series of live poker in India after WPT. This is one of the few chances Indian poker players get to play live tournaments in India. Very excited, I have prepared for DPT well this time and hope to hunt down one trophy,” said Purohit. 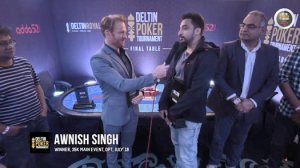 The highlight of the series is always the Main Event and here, the buy-in is set at INR 35,000, with three starting flights and a starting stack of 30,000 chips each. The last edition of DPT held in July 2018 saw Awnish Singh walking away as champion, beating a large field to win INR 35+ Lakh in prize money.

Talking about the upcoming DPT and his chances of defending the title, Singh said, “It’s going to be really competitive with the top poker brains in the country participating. I’m looking forward to a challenging event. The focus will be on playing good poker and if the cards fall in place too, we could see me as the champion again.”

DPT Main Event satellites have been running on Adda52.com since the last one month and many players have won free seats into the prestigious tournament, so we’re expecting to see a few fresh faces too. The series kick starts tomorrow so keep watching GutshotMagazine.com for all updates on the same.