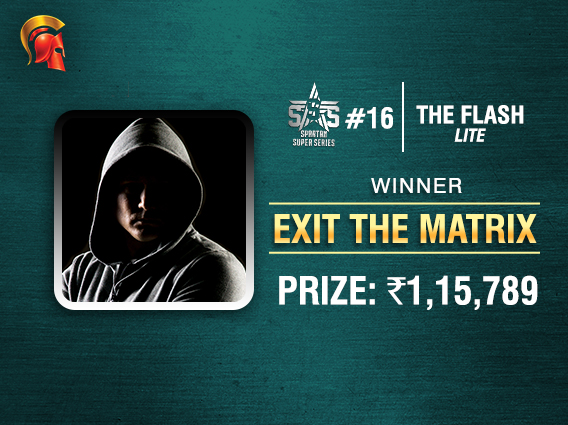 
The competition is heating up on The Spartan Poker, where another edition of the Spartan Super Series (SSS) kicked off on 10th September. With a total of 37 tournaments scheduled, players are guaranteed over INR 4 crore in guaranteed prizes to go with INR 10 lakh to be given away in leaderboard prizes.

The fourth day of action began yesterday with SSS Event #16 The Flash (Lite) INR 4.5 Lakh GTD, and the INR 1,500 re-entry tournament saw a healthy participation of 401 entries. This broke the guarantee and a new prize pool of INR 5,51,375 was generated, which was eventually shared between the top 30 entries with a minimum cash of INR 4,135.

Coming out on top of the field was ‘Exit The Matrix’, a player who is a regular part of final tables on Spartan. He also has several titles on their platform including The Flash in July, the LBS Main Event also in July, followed by an SSS title in August. Now, he has added another SSS title to his name, by winning yesterday and taking away INR 1,15,789 for first place.

The tournament ended in Level #46, with the blinds at 11,500/23,000 – 2,300 and Exit The Matrix having a 2:1 chip lead before the final hand against heads-up opponent, ‘mmonas’. Remember, mmonas is also a regular player on Spartan, winning The Daredevil in May this year.

Here, the two players went all-in after seeing the flop in the final hand. Exit The Matrix held 7d 3h and he shoved all-in when the flop opened 9c 3s 7h and the player hit 2 pairs. mmonas had 8c 7s and he also had a pair, so he made the call with the final two cards opening 2d and 4c. mmonas had to settle for the runner-up prize of INR 81,052.

We caught up with the winner after the tournament and he said, “Thanks very much. I’ve really been enjoying this series and decided to late reg this afternoon event. With around 30 people left, I made a couple of mistakes in consecutive hands and immediately noticed I wasn’t playing my A-game. I regrouped and managed to win a few pivotal pots during the final table bubble period. I thought I performed well on the FT and was able to coast to a comfortable win. I’m really looking forward to the awesome events this weekend, especially the Main Event.” Many other tournaments took place on SSS Day 4; keep reading GutshotMagazine.com for updates on those tournaments.