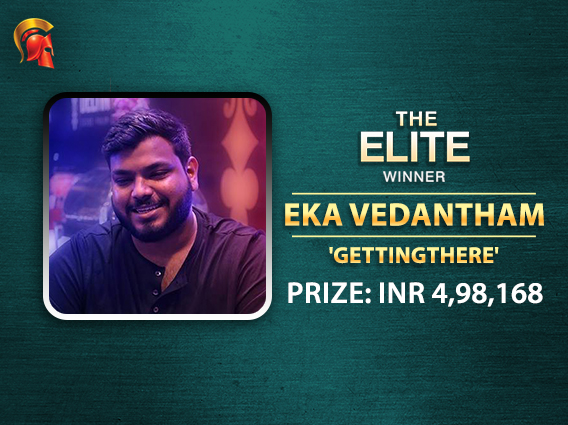 
India’s online poker landscape has come a long way in the past five years and this skill game is attracting more and more players as we go along. From being a challenging sport enjoyed by millions as a form of leisure, poker is now a viable career option for many a player who treats the game as a source of secondary income or even as a full-time professional career. Thus it is not surprising that many of the high value tournament offerings across sites draw significant numbers every week with the weekend tournaments gathering the most amount of participants. One of these popular weekend tournaments is the Elite offered at The Spartan Poker. It was in the early hours of Saturday morning when this week’s edition came to an end and it was ‘gettingthere’ who was standing tall at the end claiming victory and the biggest chunk of the prizepool.

Featuring a buy-in of INR 11,000, the Elite offers a sweet guaranteed prizepool of INR 18 Lakhs for its participants. Last night 127 entries bumped up that prizepool to INR 19.8 Lakhs which would be split up amongst the 17 top finishers. A sum of INR 31,086 was the minimum assured payday for these 17 finishers. The big prizes are of course at the final table in these tournaments and there were quite a few contenders gunning for the top spot and the big riches. Rajat ‘Garammasala’ Sharma fired out a number of bullets in this tournament and while he didn’t make it to the top, it was a fruitful day at the office with his 5th place finish for INR 1,46,124. Another pro who was eliminated next was Abhinav Iyer a.k.a. ‘Schumi91’ who scored INR 1,81,170 for his 4th place elimination.

A couple of more eliminations later we had our two heads-up opponents in Eka Vedantham aka ‘gettingthere’ and ‘ZoopaTales’. The latter had a 2:1 deficit when action was three-handed but by the time he eliminated ‘Alibaba_kings’ in second runner-up, ZoopaTales had brought his stack to almost the exact equal of his HU opponent gettingthere who had a ead of just about 20,000 chips. However that lead proved to be crucial as the tournament’s final hand played out just one hand into heads-up. A board of 8h 3h 2d 7s 6d helped gettingthere get there (yes, we could not resist) with a pair of Eights while ZoopaTales was unable to hit his Ace for a better pair or complete his other draws on that board. For the win, Vedantham took home a prize of INR 4,98,168 while ZoopaTales could console himself with his payday of INR 3,36,600.

Gutshot caught up with Vedantham after this big win. He said, “It was a great structure with quite a tough field. From 7/7 to winning it is a dream for any player and I believe I had my fair share of run good that helped me along the way. I busted my 2nd bullet in a roughly 70bb pot with less that an hour of late reg to go – KKs vs AQo. I think that was the turning point for me as I had something to prove to myself and to my opponent with AQ who said there was insane value in busting someone like me which to some degree makes sense. Everyone reacts differently to beats and stuff that happens on the table. I credit my demeanor and the fact that I was able to keep my cool, in ultimately being the key factor to me being able to take down The Elite! Was a great experience. Cheers!”

Stay tuned to GutshotMagazine.com for more stories from the world of live and online poker!