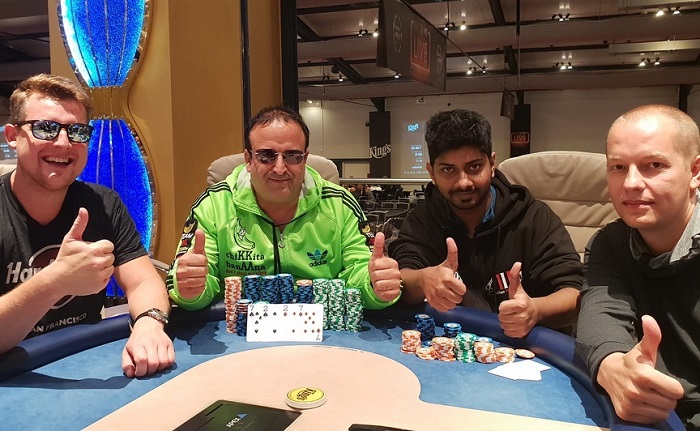 
The festivities continued over the weekend at The Indian Poker Series (TIPS), which hosted its inaugural edition between 15-20 August at the Kings Casino in Rozvadov, the biggest casino in Europe. Quite a few events were hosted over the weekend and Indian players were among the big cashes.

Yesterday was the final day of play in this first TIPS series, but before that, there were a couple of events were played out. One such tournament was the TIPS Omaha Event, which had a buy-in of €90 and a total prize pool of €6,000. Such low buy-ins helped increase the amount of Indian participation in the series.

A total of 54 entries registered to the tournament, with 43 unique players and 11 re-entries. A prize of €1,937 was calculated for the winner of this tournament, but there was a 4-way deal made on the final table, which cut out a bit from the pay-outs of the top two, while adding to that of the third and fourth placed players.

While Omaha may not be too popular among Indian players, Durga Deepak Botta made a deep run in this tournament, reaching the final 6 that were to be paid out a minimum cash of €399. 4 of the final 6 were Germans, and the title was also taken down by Germany’s ‘chiKKita banAAna’, who took away €1,508 in prize money.

Botta made a couple of cashes in this series and here, he finished third for a prize of €1,000 (~INR 80,200), clearly benefitting from the final table deal. This was one of the final events to be played before all the attention of the TIPS event turned to the €100k GTD Main Event.