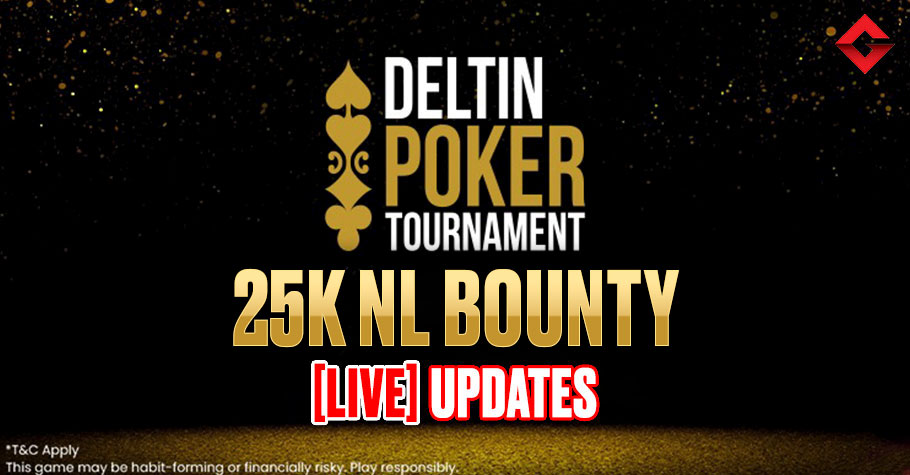 The DPT 25K NL Bounty event has finally come to an end with Varunn Gaala nailing the top spot and pocketing lions share of ₹12,24,237 along with the shiny DPT trophy and the title. Gaala is an regular online player. 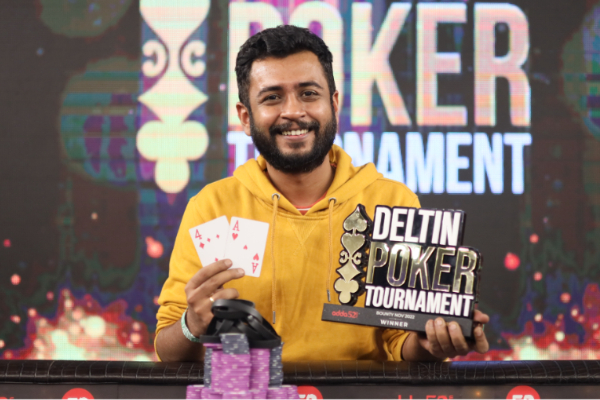 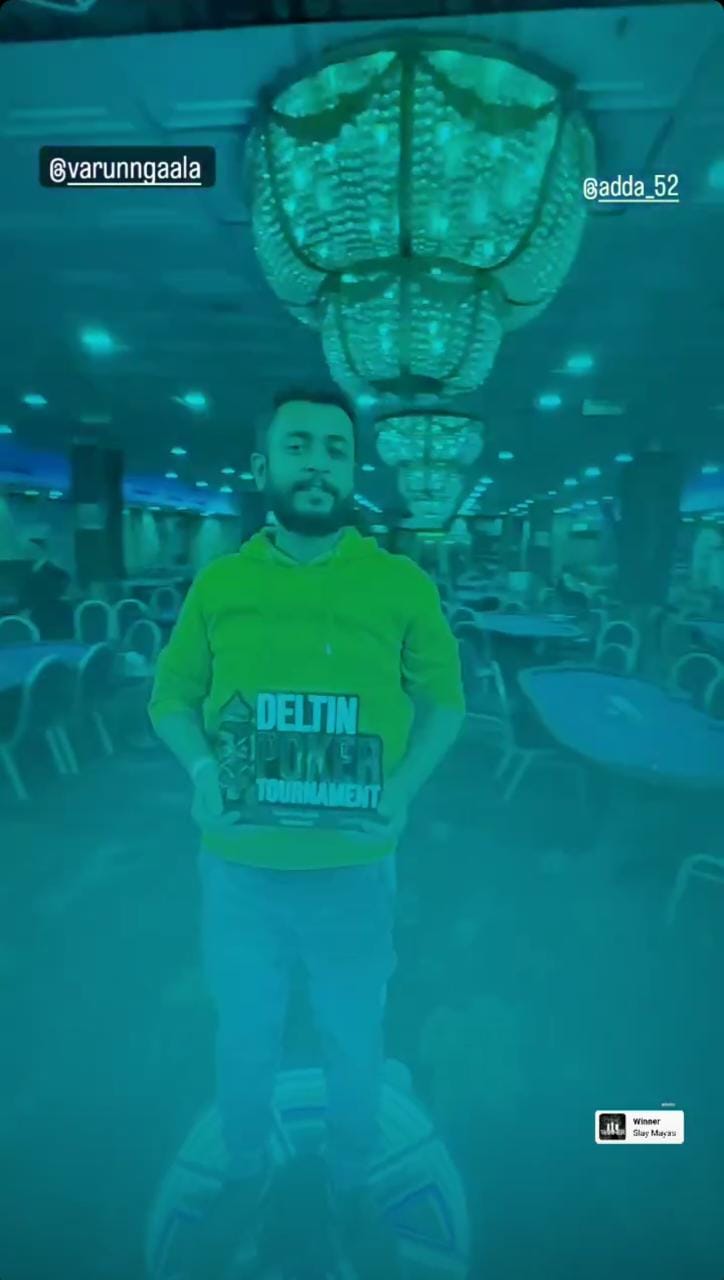 Vivek Karwa finished at the runner-up spot and cashed ₹8,30,809 for his efforts. 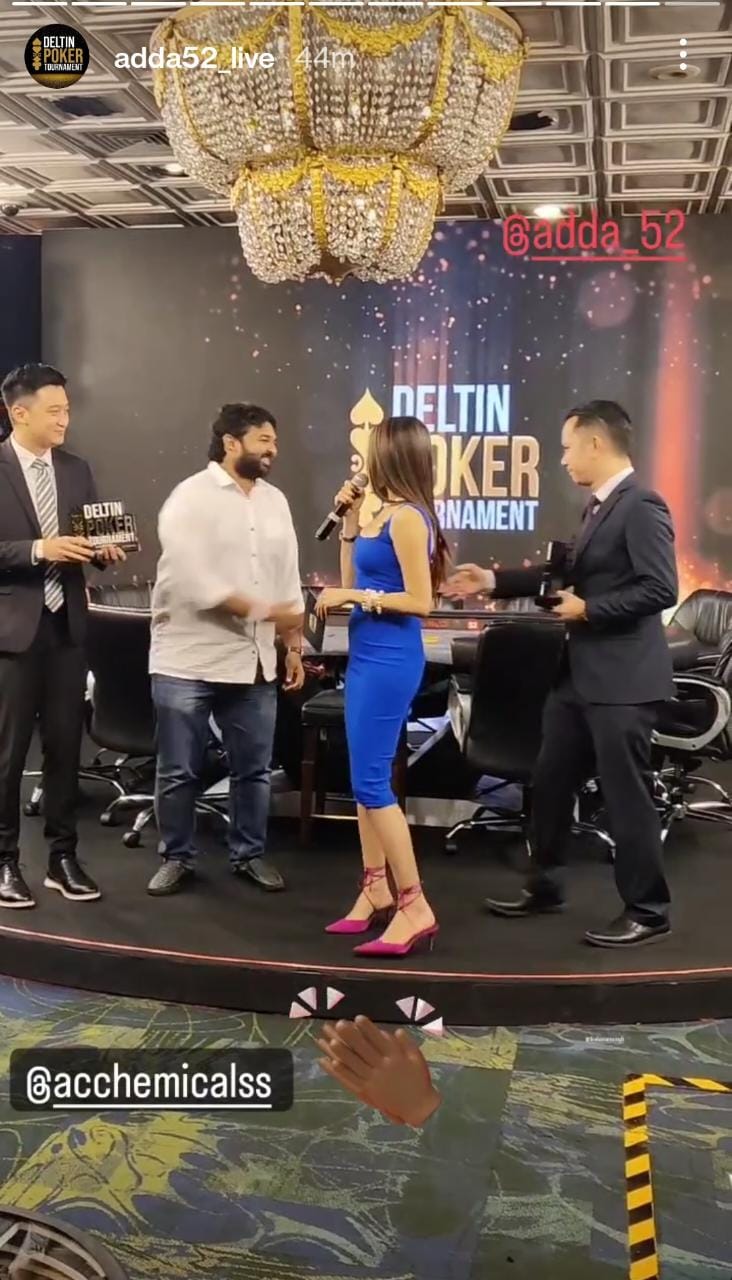 Apart from the prize money, the players also cashed bounties. We are yet to receive more details from the event about the bounties and final table payouts. Stay tuned to Gutshot Magazine for the updates. 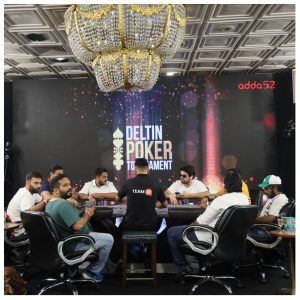 Check out our story with the lawyer turned poker pro: Follow Your Heart With Ashish Ahuja

Online reg Myron Pereira took the exit route from the 25K NL Bounty event but not without having a payday of ₹68,011. 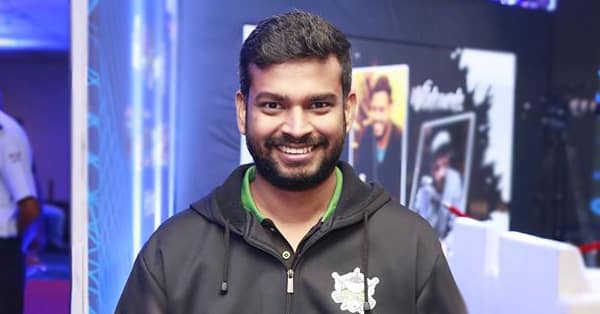 One of the popular poker players from the Indian circuit, Anant Purohit finished his NL Bounty journey at the 22nd spot and took a pay cheque worth ₹62,475. 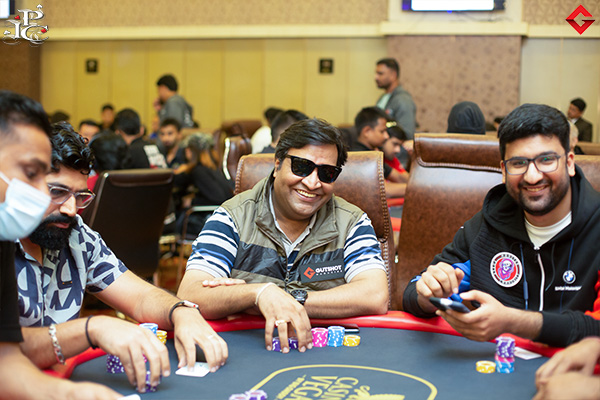 After the money bubble burst at the 43rd spot, the field is down to the top 23 players. Here are the players who have cashed so far:

The payouts and the prize pool of the DPT 25K NLH Bounty has been announced. The event recorded 338 entries generating a prize pool of ₹61,51,600. The top 42 places will be paid out, with the winner taking home ₹12,24,237 as the top prize and the bounties.

Saransh Garg seems to be on a busting spree. He first sent away Kaleem Pasha, who opened to 8K from UTG ti be called by Saransh Garg from the button. The board fanned out T ♣ A ❤ 5 ❤ . Pasha bet 20K. Garg shoved all-in, and Pasha called with a short stack. Pasha showed K ♦ T ♦ , while Garg held queens. The turn and river of A ♦ and 6 ♣ sailed Garg’s queen safely as Pasha had to leave the table.

Mall took the main pot for two pairs, while Sushant’s 7-pair awarded him the side pot. Sood couldn’t improve on the board and was busted in the three-way action.

Poker pro Arsh Grover has arrived in Goa to grind at the ongoing DPT November 2022 edition. He shared the update on Instagram stories and captioned it as “Goa for a little bit!” 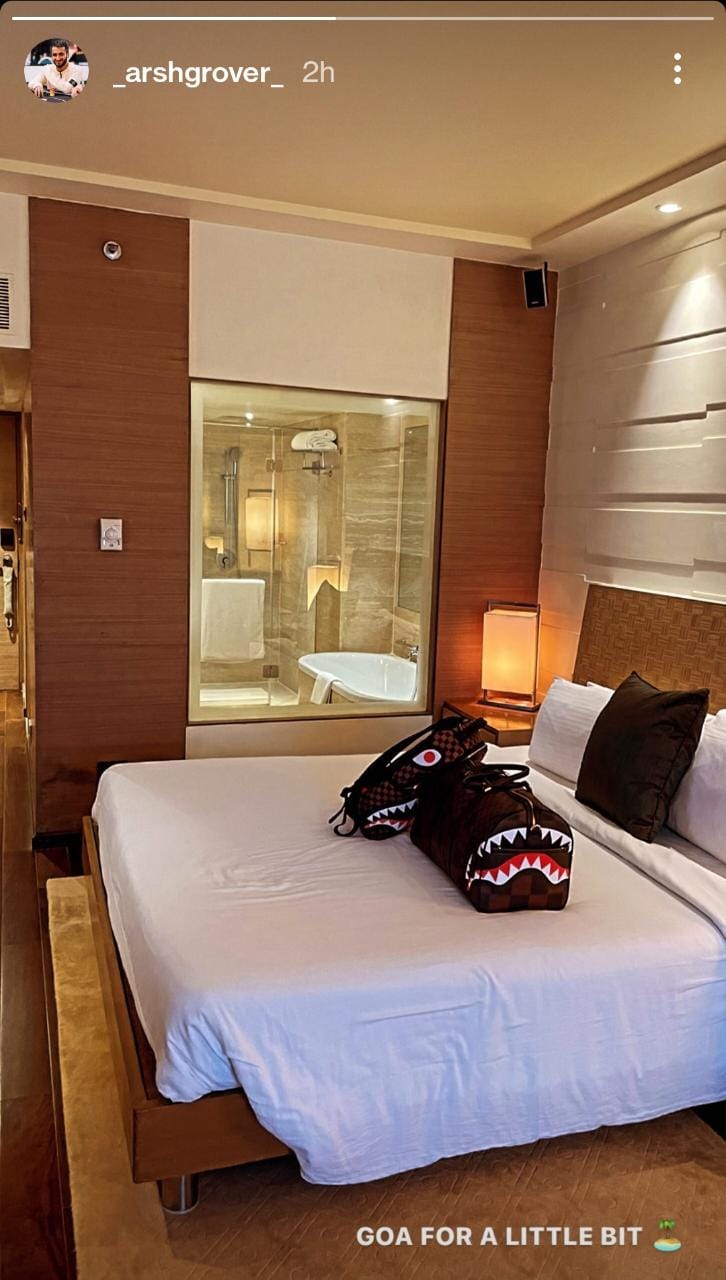 Poker player and streamer Harsh Jhirmiria has been eliminated from the 25K NL Bounty event. In a small blind – big blind battle, Jhirmiria lost to pocket nines with his A9o. The hand had 15 BB effective at Level 10 – 800/600.  He also said that he will now be playing the DPT 45K Main Event flights, which will start tomorrow. GG, Harsh! 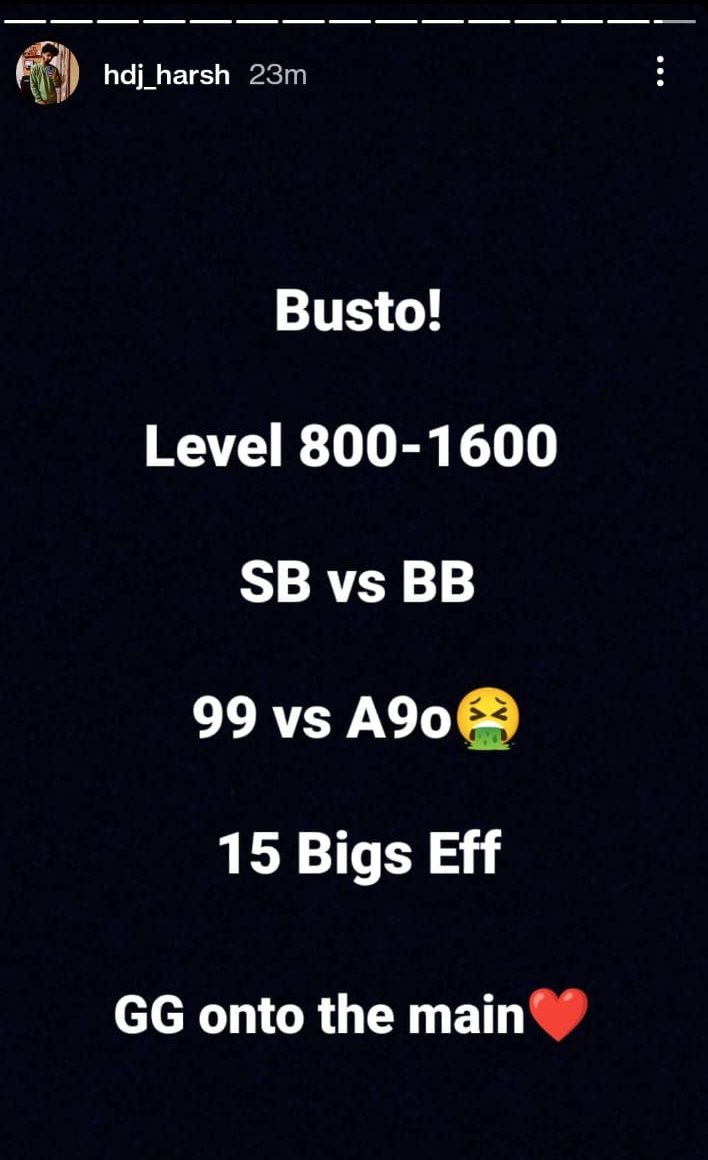 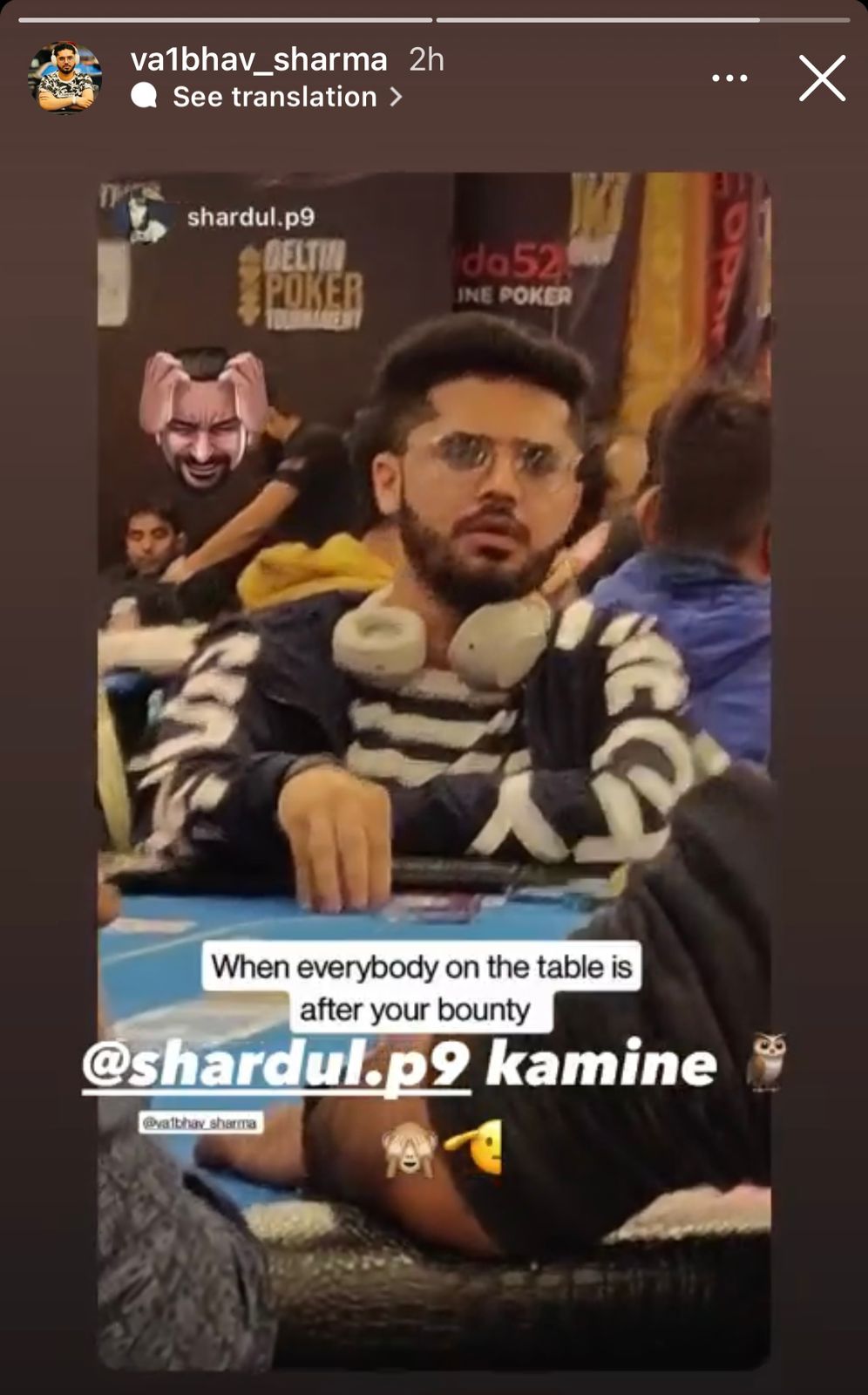 If T2 is Doyle Brunson hand, then by now, it’s safe to say J ♣ 4 ❤ is Robbie Lew hand (courtesy the Robbi Lew-Garrett Adelstein scandal). And Female poker pro Radhika Shankar seems to the favourite of J4. Yesterday she shared that she got the J ♣ 4 ❤ hand in the one of the DPT Nov 2022 sattys. Today she shared another Instagram story showing off the hand dealt to her during the ₹16.5K Warm-Up event. Although this time the suits were not the same, but it was J4o. 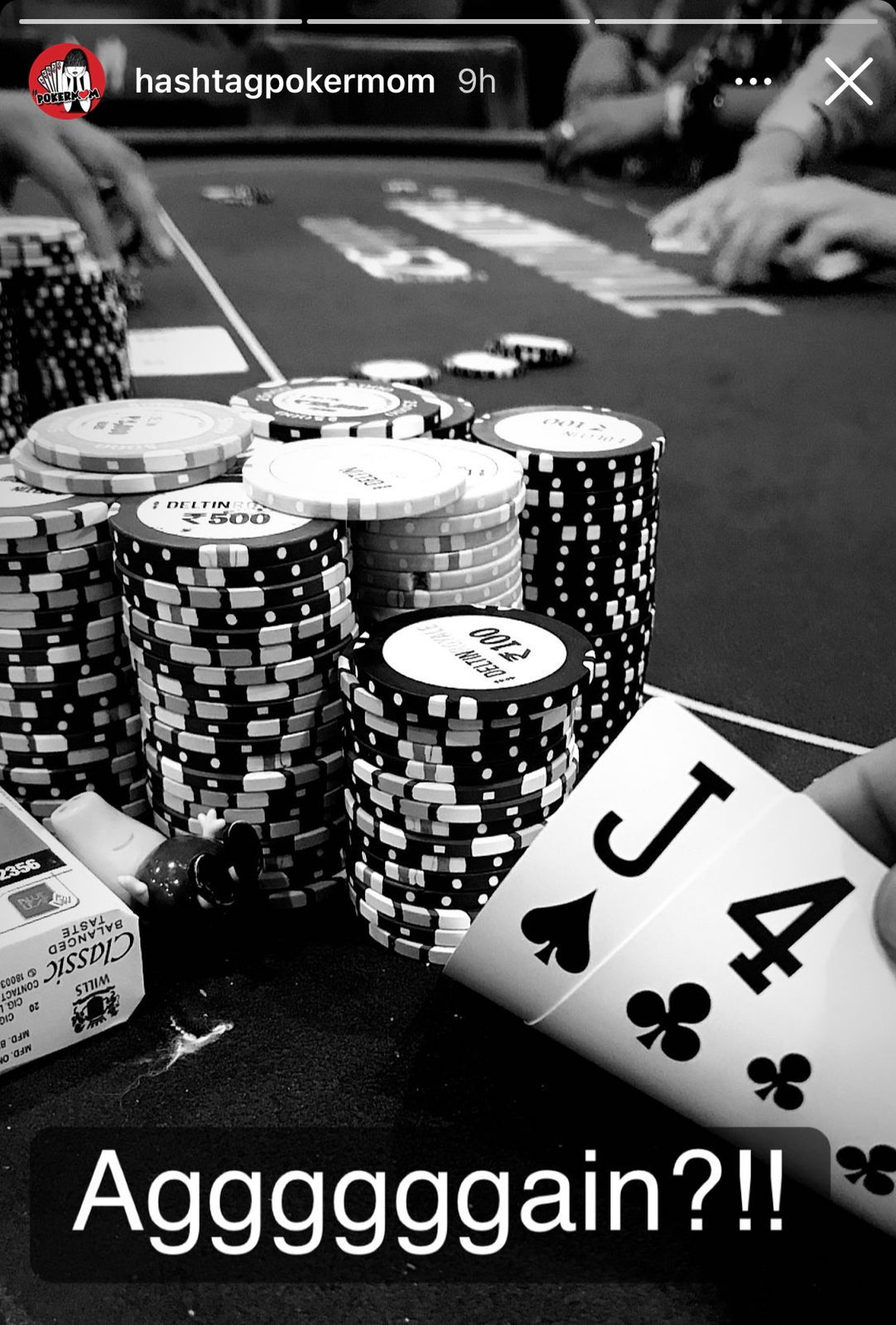 Players seem to be on a wild bounty hunt as they sit flaunting their bounty bands. They made use of their Instagram stories to flunt these bands. Ashish Ahuja’s chip count update said that the Chandigarh-based pro had two bounties before the first break.

Harsh Dev Jhirmiria displayed his three bounties alongside his stack. 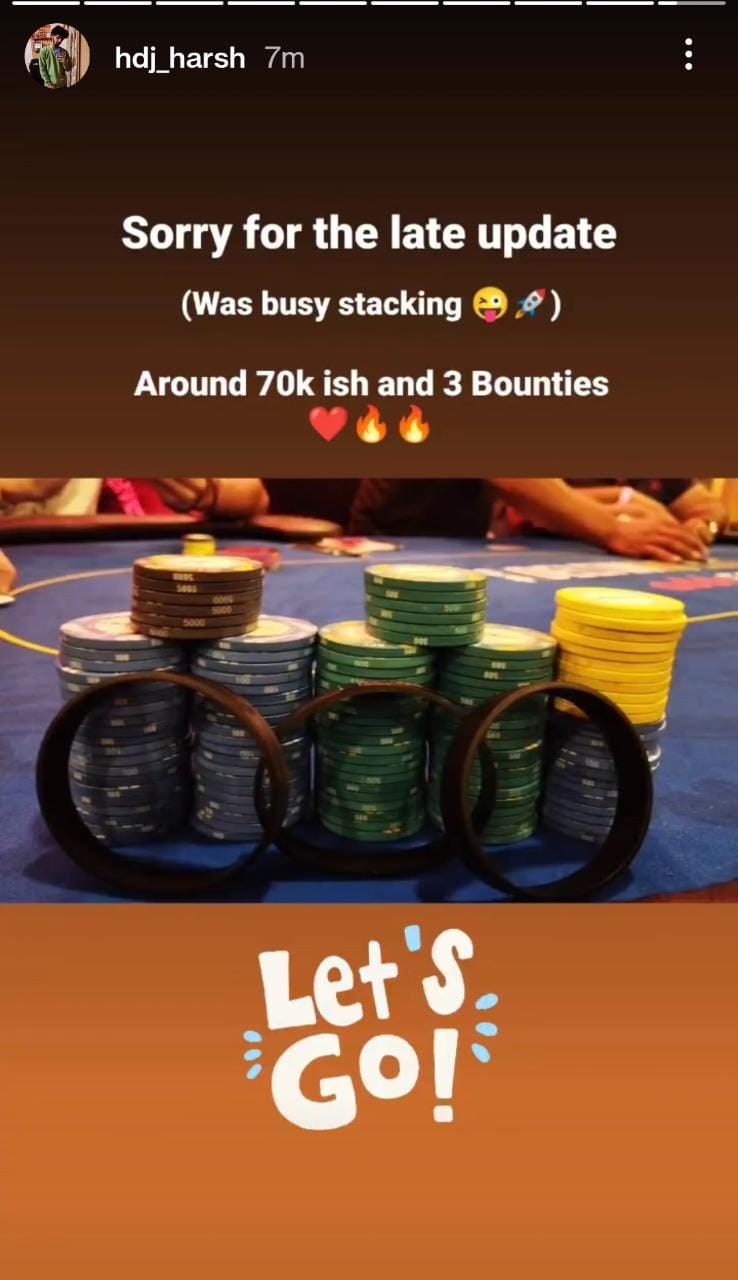 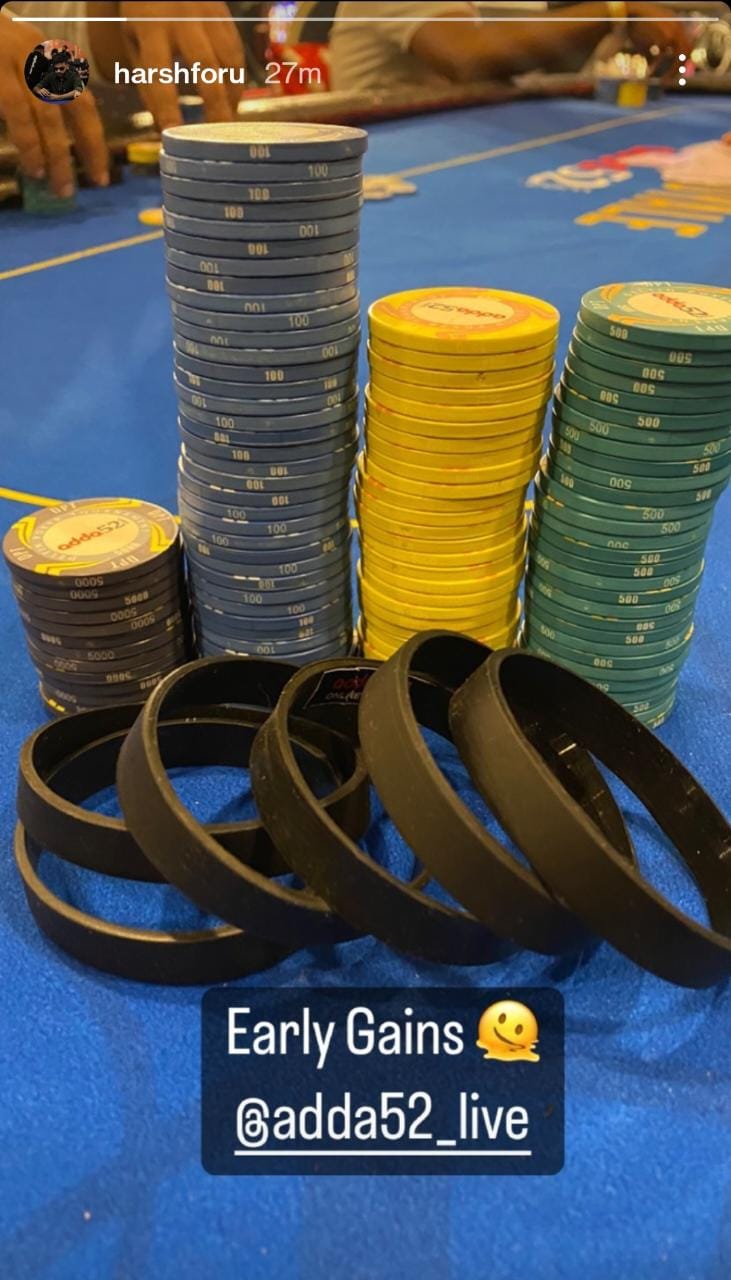 Players are out on their first break. Among the top stacks are Firoz Khan leading the pack with 81K, followed by Harsh Bubna with the second highest stack of 78.3K chips. Not very far behind is Anuj Laddhad with 72K chips.

Ashish Ahuja shared a story on Instagram talking about how he has managed to chip-up . 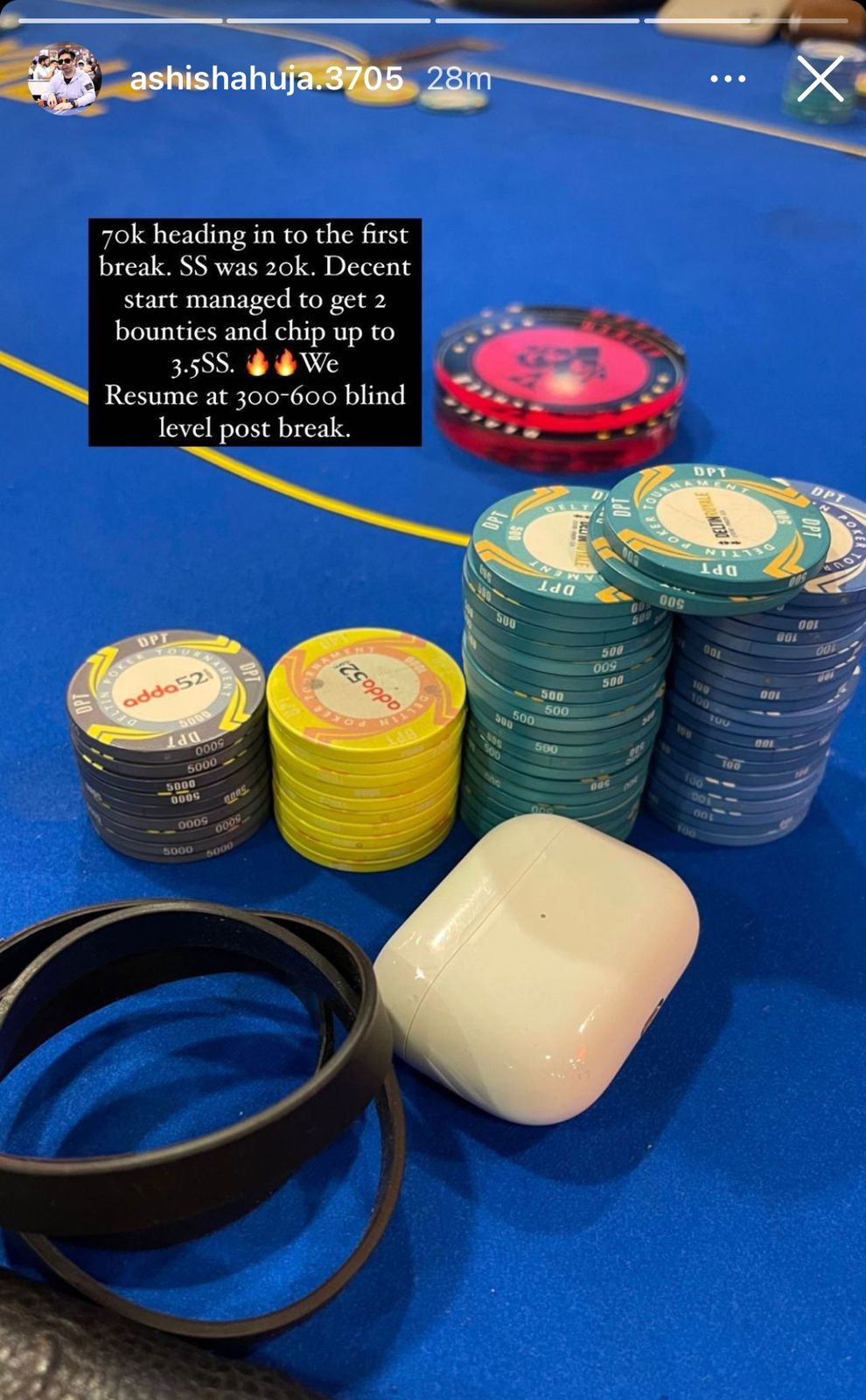 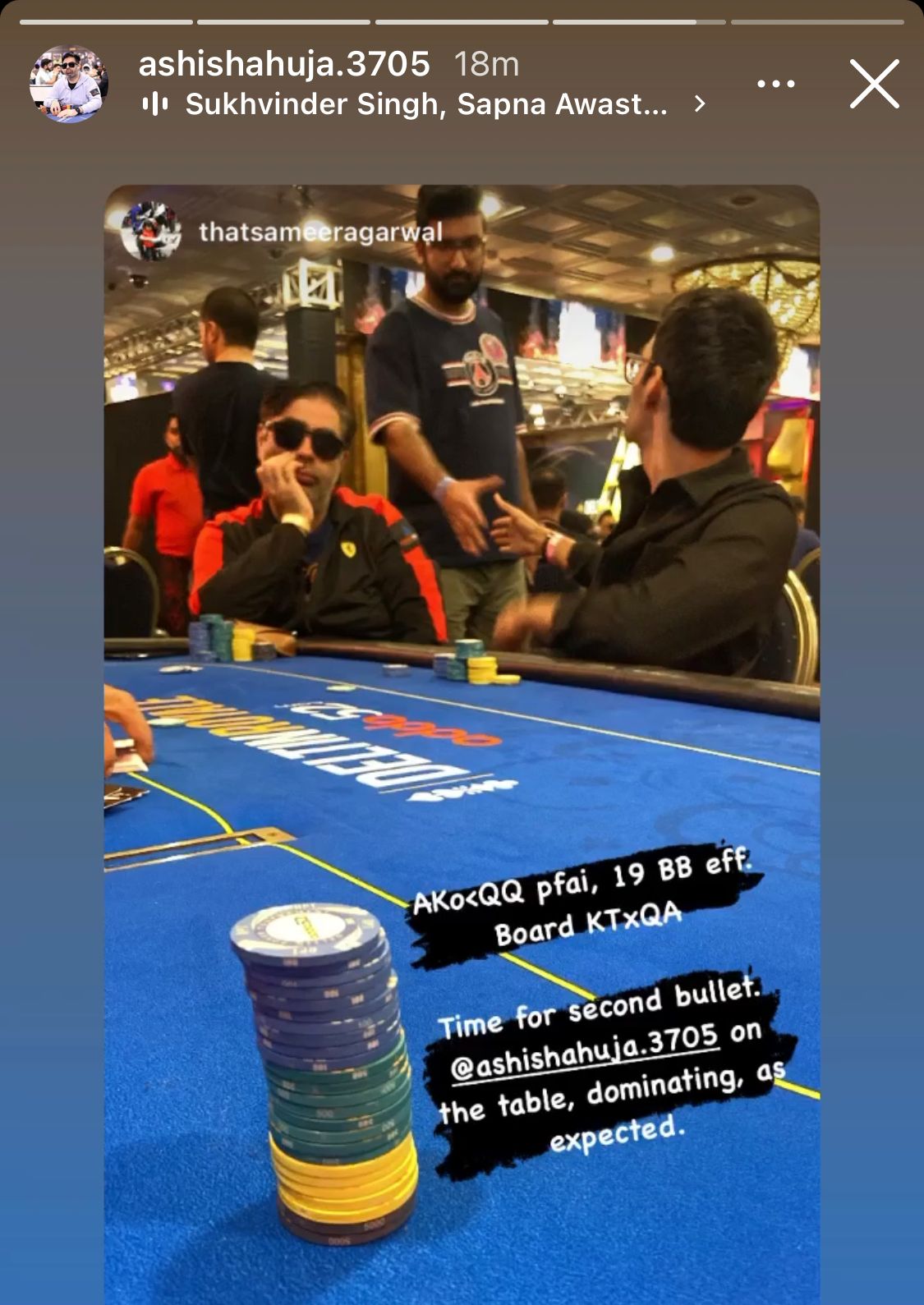 Sameer Agarwal shared on his stories that he has re-entered the tournament after a bust out. He shoved pre-flop all-in with AK off-suited on a board of K T x A Q against queens leading to his elimination. He shot a second bullet and was seated on the same table as Ashish Ahuja, who is seen dominating the table with a huge stack of chips. 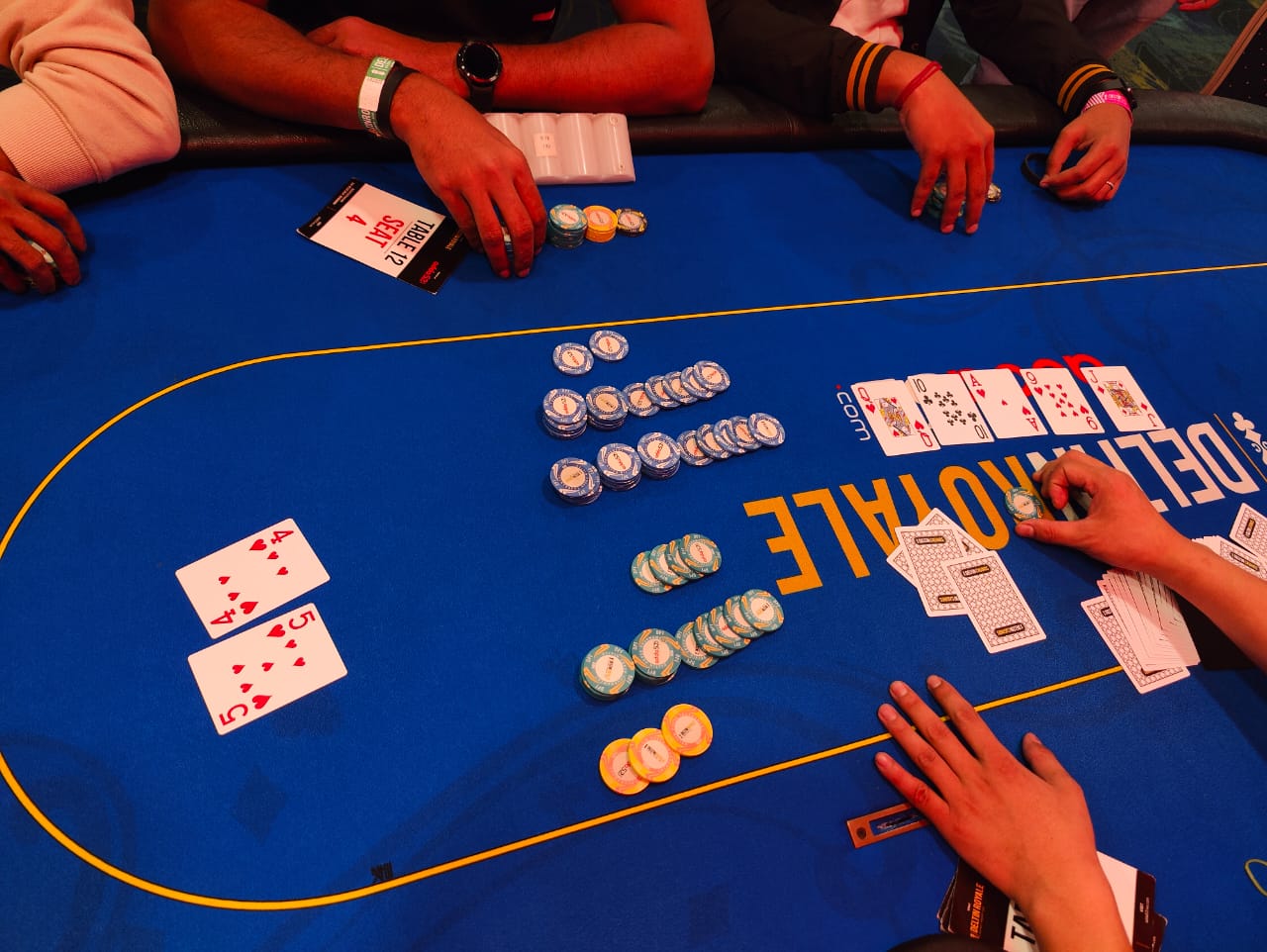 The action folded t0 Kshitij who open-shoved his entire stack. RRT, seemed surprised as he questioned Kshitij for his action, and tank called. Kshitij showed A ♦ T ♦ , and RRT flipped 5 ❤ 4 ❤ . The board showed Q ❤ T ♣ A ❤ 9 ❤ J ♦ . RRT got his flush to restore himself in the game.

As we look at the updates from the current ongoing edition, let’s recall the April 2022 edition held between 11th to 14th November 2022. Tushar Bharti shipped this event for ₹4.8 Lakh, while Amrit Kalash finished second for ₹3.1 Lakh.

After a long day at the 16.5K Warm Up event yesterday, the players are all set for another grind today. While pro Ashish Ahuja shared plans of taking a swim this morning before the long grind, poker player and streamer, Harsh Dev Jhirmiria has already arrived at the venue to take on the battle. 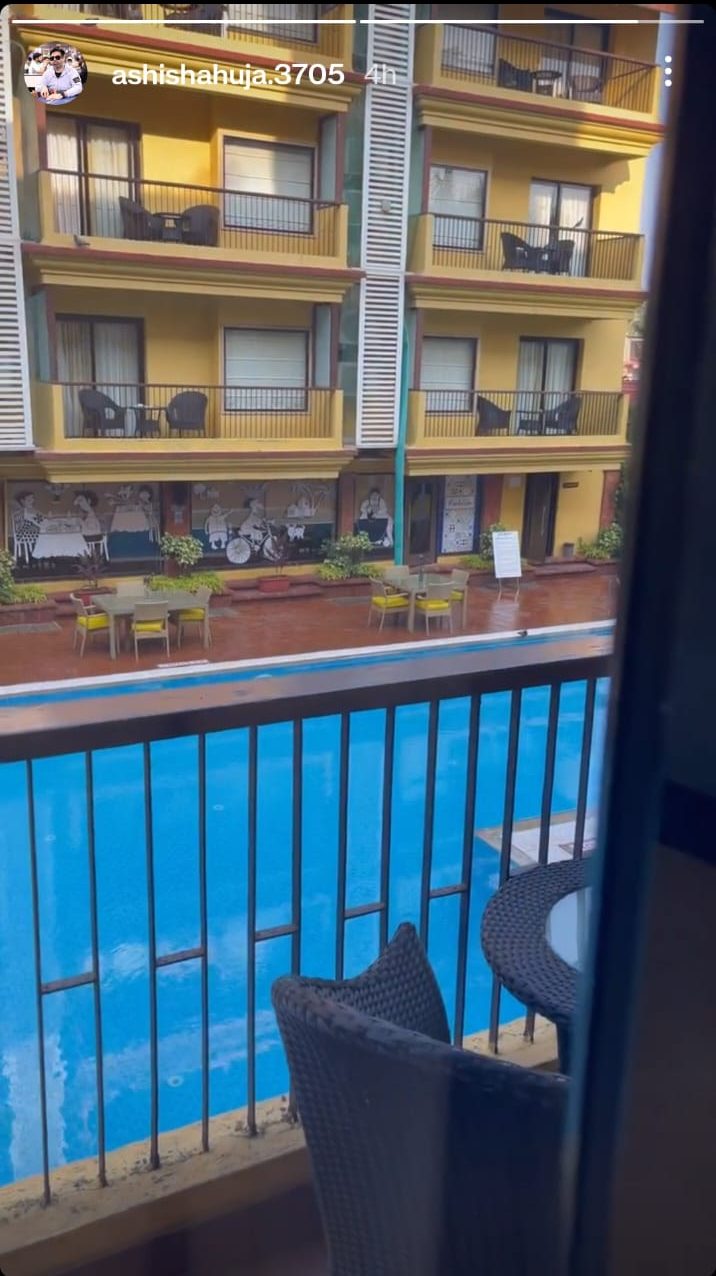 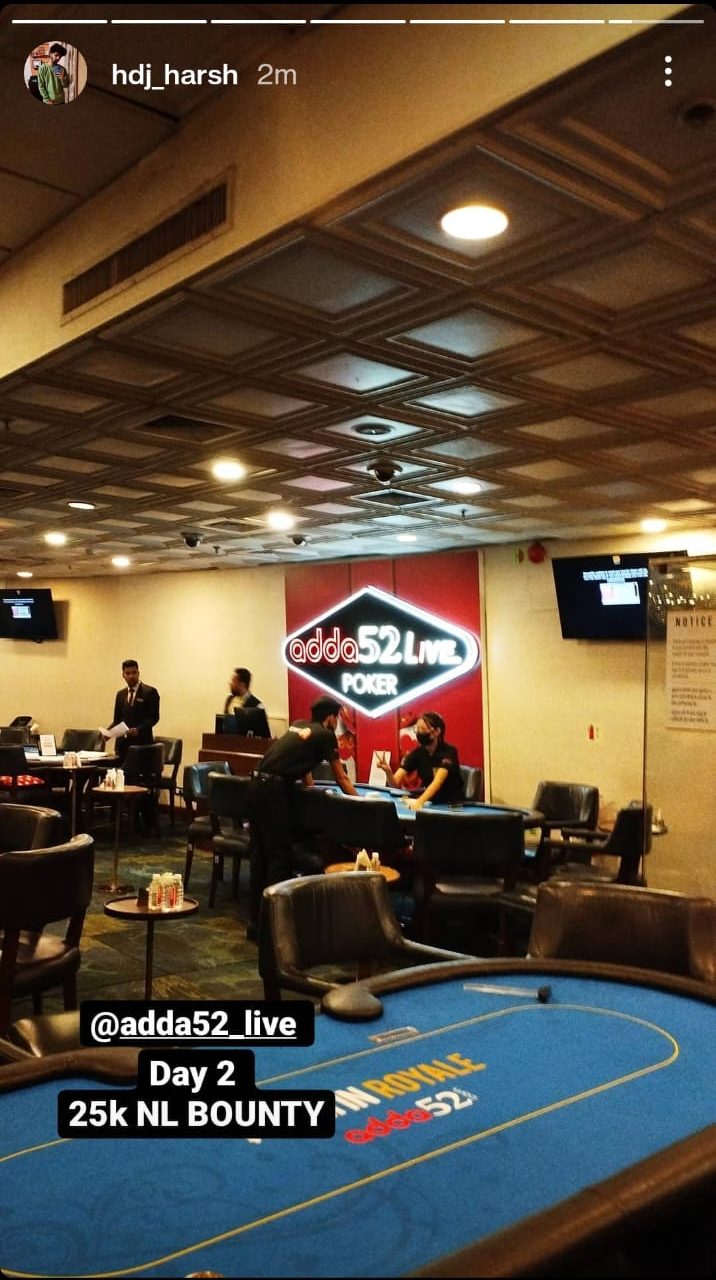 The 16.5K Warm-Up Bounty concluded yesterday with Alok Bhatt clinching the title for ₹9,80,920. The event saw 343 entries, out of which the top 43 places were paid. The min-cash stood at ₹38,875. Bhavesh Mandalia finished at the runner-up spot after a heads-up clash with Bhatt and took home ₹6,94,862. 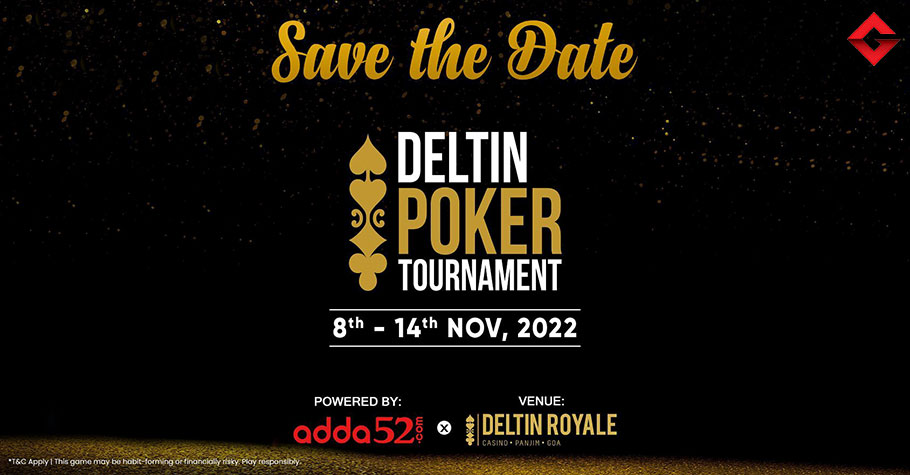 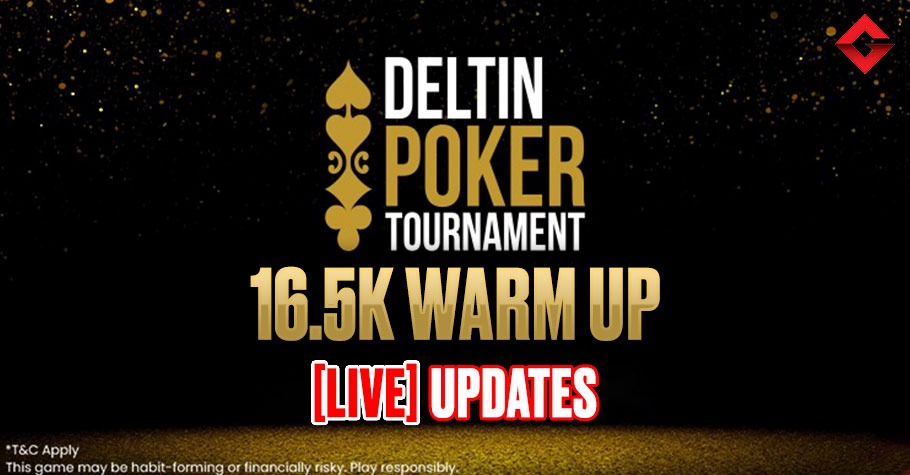 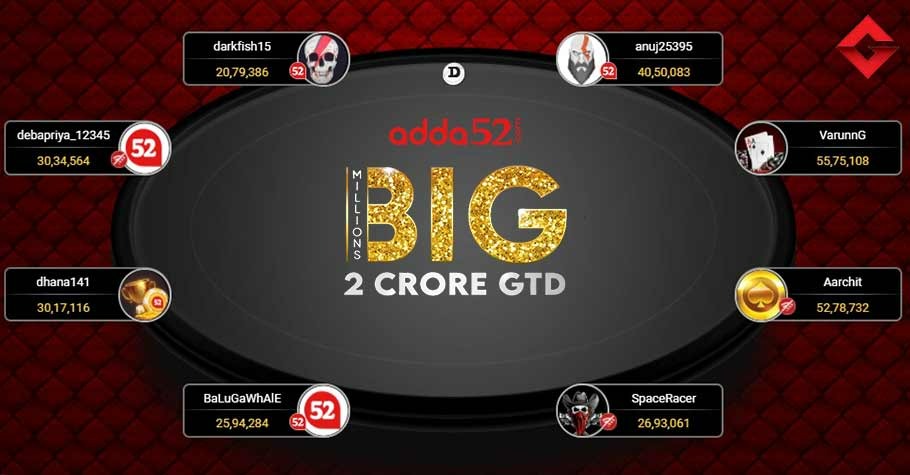 Final Table Of Adda52 Big Millions Is All Set!