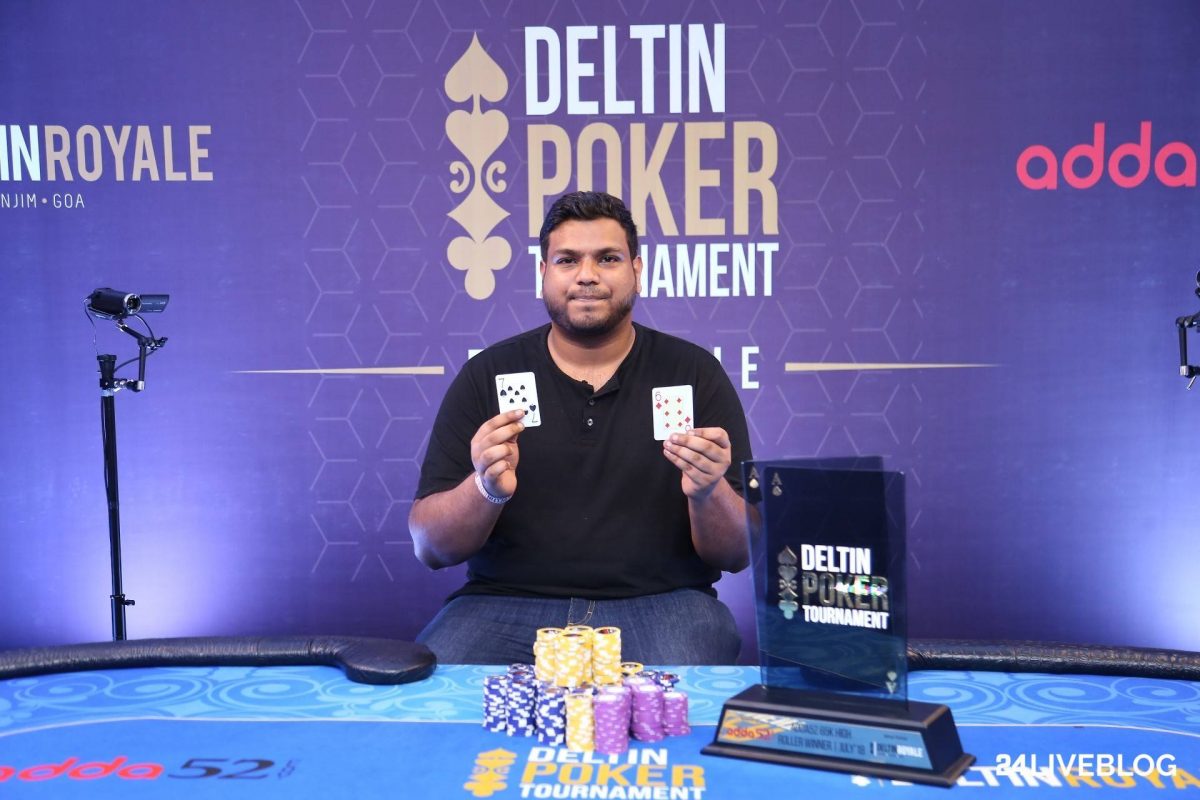 
The ongoing Deltin Poker Tournament taking place in Casino Deltin Royale at Goa saw it’s second tournament, the 65k Highroller, on schedule take place and come to a conclusion earlier today. It was a circuit regular in Eka Vedantham who claimed first place prize in this tournament outlasting the field in this highroller event.

There were three tournaments that were going on simultaneously which included this Highroller event along with the Main Event’s last starting flight taking place at the same time. A total of 166 entries participated in this tournament putting up the buy-in of INR 65,000. Some well-known names from the Indian domestic poker circuit participated in this Highroller event including Aditya Agarwal, Nishant Sharma, Mayank Agarwal, Vidwath Shetty, Amit Jain, Minissha Lamba and many more. Play carried for 14 levels and at the end, only 62 survivors remained with Jugal Advani (389,500), Amrita Sethi (363,500) and Farooq Sheikh (228,000) claiming the top three chip counts at the end of day’s play.

Star of LungiTV web series Vikram Kumar was the unfortunate bubble boy who exited the Highroller when he lost his pocket Tens versus the pocket Queens of Abhisek Panda. Kumar’s exit was unfortunate for him but it also meant that the rest of the players could celebrate as they now had made the money. Bollywood actress Minissha Lamba who was one of the bigger stacks at the end of the previous day’s play got eliminated in 14th place when she ran into Vishruth Jain’s pocket Aces.

Panda’s run didn’t last too long as DPT Deep Dive event winner Jasven Saigal was responsible for eliminating Abhisek Panda in 12th place. There was another bubble (of the final table) that was busted and this time the bubble boy who missed out on the final table of this Highroller event was Ashish Munot who finished up in 10th place losing to Eka Vedantham’s pocket Jacks. And with that elimination this is what the final table look like with Eka Vedantham leading the pack with a stack of a little over 13 lakhs in chips:-


Saigal was the first elimination at the final table finishing in ninth place for Rs.319,000. Niwesh Sharma was the next to go meeting his end at the hands of Alok Birewar who was also responsible for eliminating Saigal. Former chip leader Amrita Sethi was unable to complete her run to the title eventually finishing up in 6th place for a healthy purse of Rs.5,32,000. By the time it came to heads up, it was the two most dominating chips stacks who had to battle it out for the highroller title at the Deltin Poker Tournament. Alok Birewar going up against Eka Vedantham with the latter holding a stack of just over 5 million chips. The final hand of the tournament had Birewar calling the blinds to see a flop 7d Ts 6s upon which Birewar moved all-in for just under 1 million chips and was quickly called off by a comment on them a car turned over 7s 6d for a flopped two pair while Birewar turned over Th 3c for top air on the flop. The turn As and river Qc did not change the status of either players’ hands and with that Eka Vedantham was crowned the champion at the DPT 65K Highroller title for INR 27.15 Lakhs and Alok Birewar took home 18.70 Lakhs for his runner-up finish.

Congratulations to Eka and Alok for their top performances in this Highroller event and stay tuned to GutshotMagazine.com for updates from the remaining DPT tournaments including the ongoing 35K Main Event.