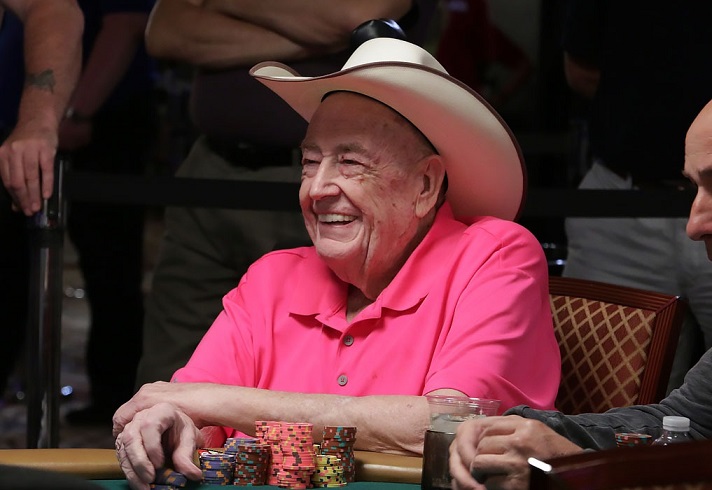 
2-time World Series of Poker Main Event champion, 10 WSOP bracelets, Poker Hall of Fame inductee, author of several poker books, a poker career lasting over 50 years, and a huge influence on the global poker industry and the growth of the game of poker itself. That’s Doyle Brunson for you!

Now 84 years of age, Brunson announced his retirement from the poker world earlier today, mentioning that he needs to spend more time with his wife now. He mentioned that deuce to seven has always been his favourite game and what better a way to bow out of the game than by playing in the $10,000 2-7 Lowball Draw Championship?

He announced that while he may play again, it will be highly unlikely. He made a late entry into this event, only to make headlines at the end of Day 2, being among the top chip counts. At one stage, Doyle and son Todd Brunson were first and second in chip counts in an event that attracted a total of 95 entries but is now down to the final 11.

“I’m planning on retiring after the summer. My wife is not in very good health, and I will stay with her for the duration of either her life or mine. I’m going to stop playing completely, but while I might change my mind, I don’t think that I will. This will be the last time that my wife and I have to spend together, and right now, every day that I leave the house I feel guilty,” said Brunson to announce his retirement.

Brunson’s last live poker title came way back in June 2007, when he shipped the Poker After Dark II, Las Vegas, while his last WSOP bracelet was even further before, shipping a $5,000 Short Handed NLHE event in June 2005. What a dream exit it will be if Brunson manages to be crowned champion of this event when he returns for the final day tomorrow.

However, it won’t be easy for the champion, as there are quite a few bracelet winners among the final 11, including his son Todd, former Super High Roller Bowl champion Brian Rast, and current chip leader Mike Wattel, who has double the number of chips than anyone else in the tournament.

Keep checking GutshotMagazine.com to know whether Brunson is crowned champion or whether Wattel holds his advantage till the end. Also, get daily WSOP 2018 updates right here.